An Open-Heart Surgery Is Khoshang's Only Hope For A Normal Life | Milaap
loans added to your basket
Total : 0
Pay Now

“I had so many plans and dreams for when he grew up. Now, the only plan I have for him, is to keep him alive! I don’t know how, but I will!” – Sunjay, Father

Till a week ago, Khoshang was in his house, running around laughing. In his village, snakes were too many in number and this hyperactive 3-year-old fearlessly caught them – he loved snakes. He would have a close look at them and then let them free outside his house. But now, for more than a week, he has been in the hospital, getting ready for an open-heart surgery. Curled up into a ball, he’s shrunk and become timid. Scared of everything, he’s nothing like before.


Little Khoshang was born with holes in his heart

“When he was born, there were two holes in his heart – one small, and the other big. The doctors said he wouldn’t survive for even a day, but he did. 7 months later, he underwent the 1st stage of bypass surgery. Since then, despite the complications in his health, Khoshang led a good life. He was still weak, compared to the children his age. But no one could ever tell he’s sick. He was always so full of life. There were times though, when his nails and lips would turn blue and we used to get so scared. The doctors had told us he would need another surgery once he grew up a little, to complete the procedure. But what if we lost him before that?” – Laxmi, mother.

He needs to undergo an open-heart surgery at the earliest, to survive

Nearly two years after his initial surgery, Khoshang now needs to undergo an open-heart surgery, to get his heart function normally. He is getting weaker, due to the lack of oxygen supply across his body. An urgent cardiac surgery is the only way to assure a long life for this 3-year-old.

“I still get nightmares of his screams, during the angiogram. He was terrified.” – Laxmi.

“It was a miracle that he survived all these years, when the doctors said he wouldn’t. He’s a brilliant boy. He’ll do really great in school, I can tell. But for that, I need to keep him alive. If not for his heart’s condition, I would have long sent him to pre-school. He knows now, that there’s something wrong. Ever since we brought him to the hospital, he has been very quiet. He cried so much during the angiogram; he’s run out of tears.  It really breaks my heart to see an active child like him lying lifeless, afraid and in pain” – Sunjay, father.

The surgery amounts to 10 lakhs now, and the parents are perplexed

Sunjay is a commerce teacher at a school 30kms from his house and earns Rs. 9,000 a month. Apart from that, he works at a farm and splits the harvest with the farm owner. The initial cost of the surgery was 2 lakhs. Having spent the past two years saving money for his son’s surgery, he got him admitted last week, when he finally had the money. However, there are new complications and the boy’s heart needs bilateral bidirectional glenn – to improve the oxygenation of the blood. The cost of this surgery amounts to 10 lakhs and Sunjay is devastated.

“Where will I go now for 10 lakhs? I was going to sell my house but it won’t fetch us much. I have spent a lot of money already apart from the hospital expenses. Day by day, the expenses are growing and I don’t know what to do! My son’s life is in my hands. I will be the one to blame if anything were to happen to him And I can’t live with myself after that!” – Sunjay, father.

Sunjay has been hit with an unexpectedly huge cost for his son’s life. Any contribution from you, big or small, will help save Khoshang. 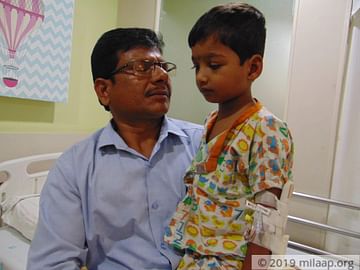 His Life Is In My Hands, I Feel So Helpless That I Can't Him

The surgery would cost them 10 lakhs, the family is too poor to afford the treatment

UPI: rzpy.givetomlpsunjay00002@hdfcbank (Copy to clipboard)
Or
Click here to read the instructions before you make a bank transfer.