This 11-Year-Old Fears That His Painfully Swollen Stomach Will Burst And Kill Him | Milaap
loans added to your basket
Total : 0
Pay Now

"My child can’t even sit, breathe or even eat properly because of his severely bloated stomach. Kevin is always hungry and asks me to feed him. But he can’t eat more than three spoonfuls. After five minutes he starts crying again in hunger. It kills me to see my child suffering so much. I feel so helpless, his liver disease is killing him. Now he just lies in the bed all day crying, asking me to do something to reduce his pain. He is scared of looking at his own stomach, he wants us to cover it with a blanket. He thinks it might burst and kill him.” - Shanthi, Mother

Kevin’s (11) swollen stomach gives him so much pain and discomfort that he can’t sit in one position for more than a minute. He sleeps only for an hour each day and wakes up in pain as he can’t move his limbs. He needs to depend on his parents for everything from going to the toilet to changing sides on the bed.

Kevin is the naughtiest of my three children and is always up to some mischief. He wants to play all the time and never sits down to study. Two months back he started showing signs of weakness. He slept all the time saying, he was tired. We thought he was making excuses to skip school. It was then we noticed that his eyes were yellow and within a few days, his abdomen started swelling. His stool was pale.  We were terrified and prayed what happened 9 years back shouldn’t repeat – Charles, Father

When Kevin was 2, he was admitted to the hospital with these same symptoms. Doctors found out that he had a drug overdose that led to an increase in liver enzymes, threatening his life. Kevin was taken care of by a nanny during that time as his mother had just given birth to his younger brother. To keep him away from doing mischief and to put him to sleep she fed him with cough syrup every night, which resulted in a drug overdose. Only after months of treatment and medications, he became normal again.

A liver transplant is his only hope, every minute wasted is fatal

11-year-old Kevin was admitted immediately to the hospital two months back. After numerous tests, he was diagnosed to have Wilson’s disease. It is a disorder where copper is not released into bile instead builds up in the liver. This condition causes elevated liver enzyme levels that damage the organ and if severe it may lead to multiple organ failure. Only an urgent liver transplant at the earliest can save his life and reduce his pain.


His father hasn't gone for work in months, they have sold everything they had

"He never used to sit in a place back then. We don’t have a TV at home and his only hobby was climbing trees in the backyard. I wish to see him like before. His little brother and sister call me daily asking when Kevin will be back home. I don't have an answer for it. I want to save my child, I can donate my liver. Kevin’s doctors have promised that a liver transplant will save him but affording it is beyond my capability." - Charles

Kevin’s father is an accountant and it’s been two months since he gone for work. His manager was kind enough to give him leaves. He doesn’t have a steady income now and is taking care of Kevin’s medical needs from the savings he had for his three children’s future. But even the savings are now slowly getting exhausted and now he needs around 20 Lakhs more to pay for the transplant. He has sold his house and borrowed money from his relatives but it is not even half of what the money needed.

This 11-year-old is in so much pain and only a liver transplant can reduce it. Your kind contribution can help save the life of this little boy who is fighting to survive 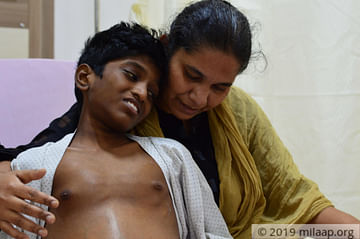 He Is Always In Pain, He Can't Even Eat Because Of His Failing Liver

Without an urgent Liver transplant Kevin's pain and suffering will never end.