A Samosa Vendor Is Struggling To Save His Toddler's Life After His Wife Abandoned The Family | Milaap
loans added to your basket
Total : 0
Pay Now

“He was 2 days old. My son started turning blue. Even in our worst nightmare, I did not think that our baby would be facing death without his mother by his side."

To Yogesh Khandelwal, poverty did not seem like a challenge. As a samosa vendor on the streets of Delhi, he lived a content life until his baby boy came along. Unfortunately, baby Ketan was diagnosed with a hole in the heart. That’s not the worst of it. His mother abandoned him within a few weeks in the care of his father. Now, nearly 2 years old, Ketan is struggling to breathe or even walk. He needs an open-heart surgery to survive.

Yogesh began to worry about his financial condition only when his wife got pregnant. There was not much he could do. He was illiterate. His entire family was facing the same plight. All he knew was to make and sell samosa-kachoris near Kotla Stadium.

“I make Rs. 5000 at most every month. It is not hard when you are used to it, but for a child, any father would want to do his best. The 2nd day of my son’s birth, he turned blue. We learned that he had a hole in his heart. That’s when it hit me. I was worried about our standard of living, and now it became a question of whether my son will live or not.”

A mother abandoned her child when he needed her the most

Everyone was anxious about saving baby Ketan. Yogesh went to his family and friends for help. They lent whatever Rs. 10 or Rs. 50 they could for his medication. At the time, Yogesh knew that surgery was not an option.

“I do not know what happened. A mother will do anything to save her child. It was such a shock. She just took off and we never saw her again.”

On Rs. 5000 income, there was not much Yogesh could save. Ketan’s surgery will cost Rs. 2.45 Lakhs, and Yogesh could never pool in the funds. He has been supporting the medical expenses so far with a lot of difficulties, and now time is running out.

“Ketan had started walking but I began to see that he could not breathe. He used to take a few steps and stop. Now he does not walk at all. He does not even stand. I should carry him all the time. I know that he is hurting. All the time he cries ‘Pappa, Pappa, Pappa!’”

Ketan’s been losing consciousness because of low oxygen in his blood. His heart needs to be fixed and Yogesh needs help to raise funds for the surgery.
Your contribution can save this baby boy and give him a shot at a happy life.

The specifics of this case have been verified by the medical team at the concerned hospital. For any clarification on the treatment or associated costs, contact the campaign organizer or the medical team.
Click here to save Ketan. 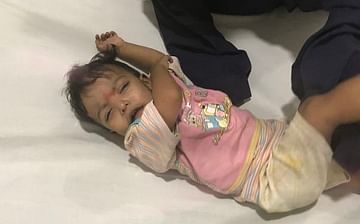 Ketan was born with a defect in his heart. His single father has been struggling to save him.