Help Baby Kavish Who Cannot Cry or Even Breathe Because Of A Severe Respiratory Infection | Milaap
loans added to your basket
Total : 0
Pay Now

KD
You are sending a message to
Kiran Dolare
Go back

Shares
Shares
Share on whatsapp
8-month-old Kavish had a cold. It was not until his cold turned into severe pneumonia that his family began to panic. To make things worse, Kavish was diagnosed with a serious blood disorder. It just delays his recovery. Alarmed, his parents rushed him to the ICU knowing they could not afford. Although Kavish's health is improving, he needs more time. His parents, however, are running out of resources to keep him there.

Poonam with Kavish in the hospital. He is doing better, but he needs to continue his treatment.

Kavish's mother Poonam is 23-year-old who gave up on life a long time back. She stopped going to school after she failed class 9. She was married early and had two children who finally gave her a purpose. For her children Pari (4) and Kavish, Poonam decided to be strong.

That decision of hers is what saved Kavish's life. He had been sick for a month and one day it became so bad – he started gasping for air. Normally, he would cry, but even his voice seemed to have failed and Poonam was suddenly scared of losing Kavish.

“We had been going to the local clinic and he was taking medications. But that day, I decided to take Kavish to a bigger hospital. They told me Kavish was ritical and put him in the ICU. His infection was too advanced and he had severe pneumonia,” Poonam recalls.

It turned out that Baby Kavish not only had a bad infection from pneumonia, but he also had a blood disorder that was blocking his recovery. He was given an emergency blood transfusions and started on strong antibiotics. Kavish still needs treatment to make it through this time.

Poonam is the one still fighting for Kavish

For Poonam, who doesn't even own a phone, deciding to take Kavish to another hospital against the family's wishes was not easy. Her husband had already borrowed over a lakh for treatment and he was scared of borrowing more. For Poonam, it was a choice between her child's life and death.

"My husband works for daily coolie at a local hotel. He cleans all day and night to get Rs. 8000. If he misses even one day, they will cut his salary. We have taken so many loans to keep Kavish in the hospital. Rs. 2.5 Lakhs we have to repay! Now we are left with nothing and we don't know what to do to save him!"

Without treatment, Kavish's chances of surviving his condition are slim. His life so far may have been full of pain and sickness but Poonam is determined to save him. Give this desperate mother hope that her child will survive his illness and become healthy again.

Kavish's family is very poor and live a hand-to-mouth existence in Mumbai. The treatment so far has taken everything they had. It has also put them in a debt that will take them years to clear. Lend a helping hand to this family and contribute towards Kavish's treatment. 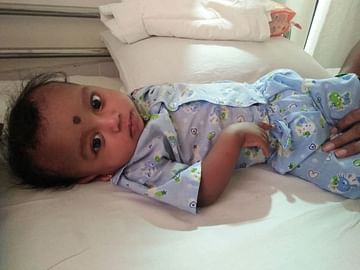