This 10-Year-Old Who Has Severe Muscle Loss Due To Liver Damage Needs An Urgent Transplant | Milaap
loans added to your basket
Total : 0
Pay Now

"My son was bleeding from his nose continuously with a high fever. And when we gave him medicines to cure, instead of recovering his health drastically deteriorated. He started to pass blood in his urine. Even though he is under continuous medication, there is no improvement in his condition.  There has been a constant loss of muscle in his body. There is hardly any muscle left in his legs and they have nearly come to show up the bones. He cannot stand on his own legs. I am afraid of losing my only son." - Shakuntala, Jitendra's mother.

Poverty was never a constraint to Balaramudu and Shakuntala. They worked their fingers to the bones for their children. When they were blessed with two children, they were overjoyed. But their happiness did not last long as they were soon struck with the despair of life. Just when their 3-month-old daughter died unexpectedly, their eldest son fell severely ill with jaundice when he was 2-year-old. When the worried parents rushed him to the hospital, they were told that he is fighting for his life with the liver disease.


"Despite poverty, my husband and I made sure that he gets proper medication and care he needed. Every month we used to travel from our village to Hyderabad for the tests and regular checkup. It costed us so much that we spent all our savings for the future and even sold our farming land. We had nothing left to afford the surgery. So until we gather the money, we planned to continue the medicines. But a few days ago, he was profusely bleeding from his nose and it wouldn't stop. When we ran to the hospital, they told us that he needs an urgent transplant." - Shakuntala.

Only an urgent transplant can save Jithendra from death

Jithendra is suffering from chronic liver disease, where his liver is completely damaged. He urgently needs a liver transplant without which the child will not survive. There is a good chance of recovery but poverty stands astride for this 10-year-old's surgery.

"Everyday he cries continuously for hours with the severe stomach ache. At times, he cries so much that he goes out of breath and won't be in a position to even utter a word. Despite his illness, he wants to play outdoors with his friends but I cannot help but restrict him from doing anything that can hurt him. Because once he is wounded, the bleeding doesn't stop and he becomes so weak that he just lays on the bed without any moment. All his life, he has only seen pain. It deeply hurts to see him thinking that diseases and hospitals are part of his life." - Shakuntala.

After Balaramudu and Shakuntala lost their farms, they started working as daily wage laborers. They earn as little as 300 a day together. They have also sold their jewelry and borrowed a huge sum of money to save their son. They have done everything they could and are unable to afford the surgery that can save their only son's life.

"He means the world to us. There is no nothing that we haven't tried to save him. Now we are empty-handed and are lost in every way to save him. There isn't much time too. We have begged and borrowed to continue his medicines. We have spent 7 lakhs until now,18 lakhs are needed for the transplant, which is above my means.  We lost a child and cannot afford to lose another, please help us save our only son." - Shakuntala.

10-year-old Jithendra's liver is severely damaged.  His condition is very critical and only an urgent liver transplant can help this child survive. The poor parents have exhausted everything they had and are left nothing to save their son from the fatal disease. The delay in his treatment will only take him nearer to death.

Your kind contribution can save Jithendra. 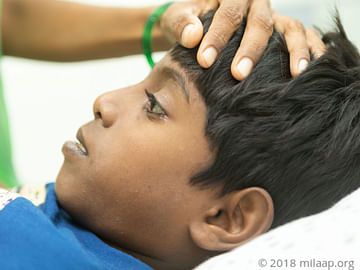 Only an urgent transplant can save Jithendra from death

This 10-year-old's liver is severely damaged, will not survive without urgent help

UPI: rzpy.givetomlpjithendr001@hdfcbank (Copy to clipboard)
Or
Click here to read the instructions before you make a bank transfer.