You are sending a message to
Mercy Evanjilin
Go back

Shares
Shares
Share on whatsapp
Jerry Franklin, a standard 11 student was diagnosed with Aplastic Anemia on June 23, this year. Jerry has been undergoing several rounds of blood transfusion and has been undergoing treatment with immunosuppressive drugs since July. He needs to continue the treatment for another 3 months, however his family is already out of money and needs support to continue his treatment.

Jerry was just not the same after the summer vacation of 2016. He would come back from school feeling very tired. He felt weak and had difficulty breathing. This was very unlike his usual self. His worried parents took him to Shri Ramachandra Hospital, Chennai for checkups. After a few rounds of tests, doctors diagnosed him with critical Aplastic Anemia and suggested immediate treatment. Jerry who loved to sports and played volleyball was now asked to take complete bed rest. He couldn't even go to school anymore. For the next six months, Jerry would undergo several rounds of painstaking blood transfusion sessions and stay at home trying to recover.

Raising funds for the treatment and making ends meet
Jerry's parents were determined to get him the best treatment he needed. His father James is a driver who makes Rs 15,000 per month. At present, he is the breadwinner of the family. Jerry needs constant care, so his mother Maria quit her job and is at home to look after her son.
For Jerry, the parents have used up all their savings and have already spent over Rs 10 lakhs on his treatment. They get some support from their elder daughter Mercy, who is a lab technician. However, it is getting very difficult for them to continue to spend on treatment.
Jerry needs another three months' treatment and his family is positive that he will get better.
Jerry’s Aspirations
Jerry was a normal 15-year-old schoolboy who aspired to become an aeronautical engineer one day. Before the diagnosis, he spent most of his time playing volleyball and meeting his friends.
Jerry's friends miss him. Since the start of his treatment in July, he has been confined to the walls of his room and does not meet his friends. He spends most of his time reading the Bible and playing video games on his tab.
It has been over three months and he is only halfway there. He misses playing on his school grounds and is waiting for the day he can play there again.
How you can help this family
Helping Jerry's family raise funds for his treatment will give them not only monetary support but also help them keep their spirits up. The family has completely changed themselves so their son can get better again. You can show them that they are not alone in this most difficult time.
Your support will be crucial for this family to save their son.
Supporting Document 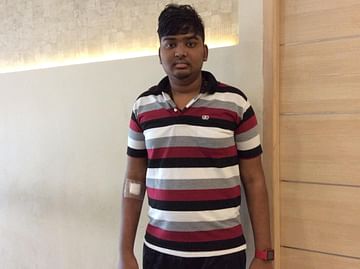 Jerry needs our help to get cured of Aplastic Anemia. Our timely support will save him.