With Only Rs. 7000 In Their Hands Parents Desperately Trying To Save Their 2-Year-Old From Pneumonia | Milaap
loans added to your basket
Total : 0
Pay Now

R
You are sending a message to
Raghavendra
Go back

With Only Rs. 7000 In Their Hands Parents Desperately Trying To Save Their 2-Year-Old From Pneumonia

Shares
Shares
Share on whatsapp
On Sunday,  Uma and Vijaya rushed their son Jashwik to the hospital when his fever did not subside and he started vomiting whatever he ate. They had no idea that it would turn out to be something very serious.

“We thought the money would be enough for the tests and medicines. We didn’t know he was so critical. They put him on the ventilator. He needs to stay in the ICU for a few days.” -Uma Shankar

The disease that almost took his life

Jashwik was diagnosed by acute kidney infection which was caused by Pneumonia. Hence he needed immediate care. Since then he has been struggling in the ICU to recover from a disease that almost took his life.

“I didn’t ever imagine that my child would suffer like this, watching him with machines attached to his body… I can’t watch him like this.” - Vijaya

He can’t swallow even the water he drinks

He can’t eat any solid food. He is fed through a tube in his nose. He tried drinking water once but he couldn’t swallow it due to pain in this throat.

“They feed him milk and that is all he takes. It’s been days now, he has not eaten anything. He loves apple but even drinking water hurts him. He cries but I am unable to do anything to reduce the pain.” - Uma Shankar

Uma Shankar works as an assistant director in the film industry. It is not as glamorous as it sounds. He gets paid only when he gets work which might take him months. Even after working, he has to wait for long to get paid.

“I thought I would restart my career after Jashwik grows a little but now I regret it. I should not have stopped working… That money could have saved my child today”- Vijaya

The treatment will cost them around 5 lakhs but they are unable to afford it.

“He is a super active child,always used to play around with his cycle and toys. Now... He is my only child, I can’t live without him”- Vijaya

Jashwik’s kidneys have been treated but he still needs PICU care to recover completely or else he won’t be able to make it. With your help Jashwik can go back to his normal life. 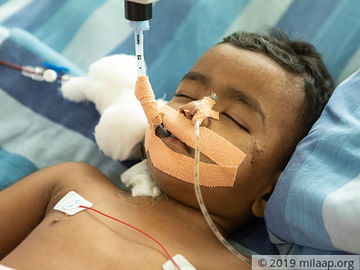 Jashwik Needs To Be In The ICU To Recover Completely

Jashwik's pneumonia led to kidney injury. His family is desperate for your help