I Escaped The War In Sudan And Came To India Penniless Only To Find My Wife Fighting Cancer | Milaap
loans added to your basket
Total : 0
Pay Now

"I took that job as a cook in Africa to save our family. I had to give it up, did not get paid, run back to India when the war broke out, only to find Iti fighting cancer."

My wife Iti Biswas(24) has blood cancer and I have come all the way to Bangalore just for her treatment. Unfortunately, her treatment is not progressing as expected and the doctor tells us that we will have to stay back longer. I have run out of all avenues to save my wife and am requesting for help saving her.

Iti does not know yet that she has Blood Cancer

Iti has a very childlike personality. She laughs like a child, loves small babies and sometimes gets angry over small things. It is her biggest strength and it is why I have not yet told her she has Cancer. Cancer is like that. It can break people and shatter lives in a moment. I cannot even imagine telling her she has it.

I want Iti to stay hopeful. I want her to believe that she will be fine. It will help her fight better. If she knows she has cancer, she will give up on herself. It is this painful possibility that gives me the strength to go on. I need her and my 3-year-old son needs her.


Me with Iti and our son Anuj

Iti thinks she has a tumour and the injections are helping to shrink these. It's not easy to keep her convinced. She has overheard people saying Cancer, and some people around her have even suggested to her she might actually have cancer, but I have told her that chemotherapy is given for many diseases. I tell her things like - It's not just cancer. People don't know, only the doctor does, or, let people say what they want. I am running out of excuses.

Though Iti is fighting, she needs more treatment to get better and beat her blood cancer

Our small house in Nadia was always in a bad state and needs a lot of repairs. Iti wanted us to one day fix the house and make it beautiful. When I was offered a job as a cook in Africa, I thought that my chance had come. Even for a few months, I would make enough money to fix our house at least.

The nightmare began with what looked like a dream job

But just weeks after I went, war broke out near Sudan and though I worked for 6 months, I never got paid. Iti and my son Anuj were living on our savings. I came back to India and found Iti in a terrible condition. She had stopped eating and lost a lot of weight. Even worse was her constant chest pain.

We went to a lot of doctors, both near our village and in Kolkata. They couldn't find anything. It was when we came to Manipal in August, that I was finally told that she had cancer. I was shocked and broken – but I had no time to brood. Not while cancer ate my wife from inside.

For the last few months, we have been in Bangalore because we don't have enough money to travel twice a month. Iti's father sold off his small parcel of land to pay for some of the treatment. All my savings are gone too. Till now, we have paid bills worth close to Rs 7 lakhs and we have nothing left to continue.

I often think – why us? I have never wished any one suffering or harm. Why should my family going through so much pain? Has God stopped looking after us? I have nothing left. We sold a small parcel of land we had and have asked every one for help. This is our only hope.

She always dreamed we would have a nice house, and live there with our son. She wanted to send him to a good school. She tells me to work towards a better life for our son. Our present house's condition always bothered her. Her dreams have always been my dreams. On my own, I cannot even dream of a life. All I want is to have my wife with me. Nothing else matters.

My 3-year-old son is too young to lose his mother. Please contribute to help me save my wife Iti. 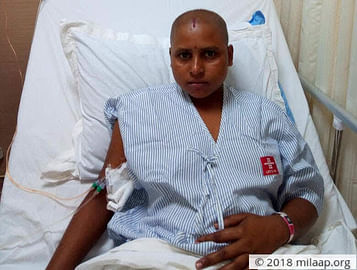 24-year-old Iti battles with cancer and needs our support

Iti has been fighting blood cancer and her husband needs help getting her treatment and saving her.