Her Father Raced Across 4 Cities and 7 Hospitals To Try And Save Her From Dengue | Milaap
loans added to your basket
Total : 0
Pay Now

“I’ve taken my daughter to more than 7 different hospitals and doctors, across 4 cities in 2 states over the past 10 days, trying to get her treated. But everywhere I went the price of the treatment was so high, more than I could ever afford. If I had the money I would have paid them immediately to save my daughter's life, I would give them everything I had. But I didn’t and I still don’t. I just want my daughter to get better. I just want Ishvarya to come home...” – Mallikarjuna, father

Ten days ago little Ishvarya (9) woke with a high fever. Her concerned parents had taken her to a local clinic where the doctor gave her an injection to make the fever subside. But one day later the fever was still serious, so they took her to a bigger hospital where the doctors immediately suspected Ishvarya’s condition. A few tests later, they confirmed it.

“Your daughter has severe dengue fever. Her life is in danger.”

“I’ve been hearing about dengue for such a long time now. On news channels, in the newspaper, everywhere. So many people talk about it, so I know how dangerous it is, and that so many people are still suffering from it all over the country. I never really took it seriously, or gave it a second thought because… because it wasn’t me, it wasn’t my family. But now… my own daughter is suffering from it, and the doctors say she could die. I’ve not stopped crying ever since I found out, and I wish no other family ever has to go through this pain.” – Mallikarjuna

In his desperate race to save his daughter Mallikarjuna reached Chennai, where Ishvarya has been hospitalized since. Her situation remains critical; she has acute liver and kidney damage, and her symptoms are barely under control with the medical care she has been receiving. Little Ishvarya is still suffering from high fever, respiratory distress and fatigue, due to which she is asleep most of the time. When she wakes up, she cries from severe abdominal pains and frequently vomits. Left untreated, soon she’ll start vomiting blood.

“She is the apple of everyone’s eye in my family. Mine especially, as she is the youngest of all my grandchildren. I want her to get better and come home soon. My son tells me she is fighting for her life… I cannot bear that thought. It is not right for a child to leave this world before her grandmother does. I pray day and night that someone helps us save my granddaughter’s life…” – Chinnapaapa, Ishvarya’s grandmother

Mallikarjuna is a watchman, and his wife, Rani, works as domestic help. What little savings they had, they’ve already spent, and they’ve taken as many loans as they can from anyone who would help. Unable to see her daughter in such a dire condition Rani too has fallen ill, and had to go back to their village so her family could take care of her. With each day that passes, their little daughter gets closer and closer to death, and this family is losing hope.

You are now the only one who can pull this family out of this sudden darkness. Donate now, however much you can. 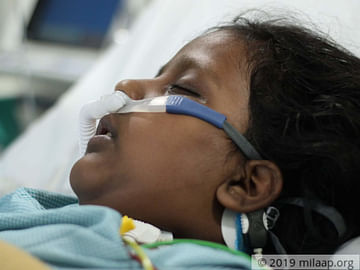 Her grandmother cries by her bedside every night

UPI: givetomallik1@yesbankltd (Copy to clipboard)
Or
Click here to read the instructions before you make a bank transfer.