A Terrible Accident Has Left This Boy With A Fractured Skull And A Brain Bleed, He’s Critical | Milaap
loans added to your basket
Total : 0
Pay Now

A Terrible Accident Has Left This Boy With A Fractured Skull And A Brain Bleed, He’s Critical

Shares
Shares
Share on whatsapp
It was 9 pm. Dipika was worried – Honey said he would be back home half an hour ago, where was he? His phone was not reachable. Dipika, like any mother would, began to panic. Her intuition told her something was wrong.

She was right. At 9:13 pm, she received the most terrifying call – “Am I talking to Honey’s mother? I’m calling from the hospital. Your son has been in an accident.”

18-year-old Honey was unconscious in the hospital, with severe injuries on his head, hands and chest when his parents reached the hospital. He could’ve died that night.

After more than 15 days in the ICU, Honey woke up 2 days ago. Honey’s skull is fractured, he also has a bleed in the brain for which he underwent surgery. His condition is critical. Honey was on a bike with his friend when a vehicle came and hit them – his parents haven’t had the time to even find out what happened, which vehicle it was…all they have focused on is getting him treated in time.


“He’s the only one that knows what happened, but the doctors have told us not to ask him anything right now. He shouldn’t be under any stress.”

Dipika can’t look at Honey for more than a few minutes, watching him lying there so helpless breaks her heart. She ends up crying every time, and now that Honey is awake, she doesn’t want to see him like this. She wants to remember him as the happy teenager he was before this, who had a normal life of college and friends.

“I’m sitting in the waiting room right now because I can’t look at him…I don’t even know how all of this happened. I don’t want to know, all I want is for my son to come home.” - Dipika

“I drive a school van, but I haven’t been able to go for work often. We’ve spent nearly 5 lakhs till now. He still needs to stay in the hospital longer to survive, but we have nothing left, nothing.” – Vipul

The specifics of this case have been verified by the medical team at the concerned hospital. For any clarification on the treatment or associated costs, contact the campaign organizer or the medical team.
Click here to save Honey 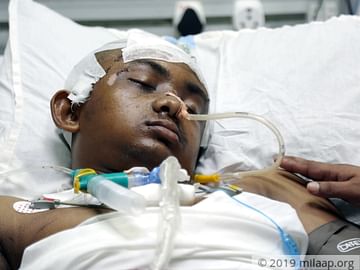 No One But Honey Knows What Happend That Night

Honey needs to stay in the hospital for longer to recover from this tragic accident.