A Bus Ran Over His Leg, Now The Only Way They Can Save Him Is By Amputating His Leg | Milaap
loans added to your basket
Total : 0
Pay Now

V
You are sending a message to
Vaishnavi
Go back

A Bus Ran Over His Leg, Now The Only Way They Can Save Him Is By Amputating His Leg

Shares
Shares
Share on whatsapp
While everyone his age is worrying about what subjects to take for higher education, and what to do during vacations, Hari (16) is forced to make tough decisions. He has to decide if he wants to stay bedridden for years or get his leg amputated and start a new life. There cannot be anything more terrible than the thought of losing a part of your body forever but Hari has not let that fear engulf him.

"Amma, I'll lose one leg but I still have the right leg, I can manage with it. Nothing else is going to change, I can continue with my studies. I'll go to college and find a good job too," says Hari to his mother who cries uncontrollably.

It was a usual day for Hari and his friends as they waited for the bus to come. The bus was unusually crowded but they got into it to reach school on time.  Hari was standing close to the door because he would reach his school soon, he held on to the handle. But when the driver suddenly pressed the brake, Hari lost control. He fell off the bus and before anyone could realize the wheels of the bus ran over his legs. The next moment he was lying in a pool of blood.


"Some people came running to our house and told us that Hari has fallen down from bus and he was taken to the hospital. It was a shock to us, we couldn't utter a word.  I can't forget what I saw when we reached the hospital. Hari was unconscious, the skin in his legs was completely peeled off, bones were broken, he was still bleeding. At that moment, I thought that he will not make it, " - Maragatham

Hari was admitted in government hospital for 5 months. Everyday he had multiple injections and tests but he was only getting weak with every passing day. His parents didn't give up. They took him to a hospital in Chennai and it was there they found out that his left leg is fully infected and there is hardly any possibility to recover. The only realistic option left to him is to amputate his left leg fully.


"He was there with us when doctors explained about the surgery. It was too much for us to bear but he was listening to the doctors carefully. We knew that the decision should be his, in fact we were not prepared for anything, He just thought for a while and told the doctors that he is ready for the amputation and he cannot wait anymore to go to school"  - Maragatham

We fear that we will fail him without any help

Damodaran, Hari's father, is a daily wager, he does all odd jobs and manages to take care of his family. Since the accident he was unable to look for work, he has been borrowing from his friends and running his family.  He is already in huge debts, he needs 7.7 lakhs more to continue the treatment. He is desperately waiting for your help.


Hari with his family

"I do not know how we are going to manage all this. Hari has so may dreams in life and despite all this pain and trauma he remains positive. If we stop the treatment he has to live in pain all his life. Please help us, you are our only hope," - Damodaran, father.

Only your contribution can help this 16-year-old to live the life that he dreams. 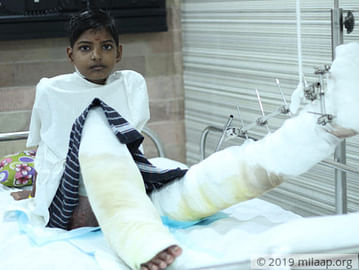 His parents have nothing left with them and they need your help to continue the treatment.

UPI: givetonagarajdonations1@yesbankltd (Copy to clipboard)
Or
Click here to read the instructions before you make a bank transfer.