Boy Prays That Blood Disease Doesn’t Kill Him And His Younger Brother, Needs Help For Treatment

Shares
Shares
Share on whatsapp
Little Hamza (8) has not gone a day without praying ever since he was old enough to understand that he is ‘sick’. He would pray every time he got painful blood transfusions or injections in the hospital, and now he prays for his little brother Haider (1) who is also fighting Thalassemia as he did. Although Hamza had a bone marrow transplant, his life is still in danger.

“He remembers all the pain he went through. On some days he would say ‘abbu jaan it pains so much I think I’m going to die’ that hurt me the most, that my son understood death.” – Afsar, father

Thalassemia is a severe blood disease that affects the body’s ability to produce haemoglobin. Without blood transfusions every 15 days, Hamza would be too tired to even get out of bed.

Hamza (8) has not gone to school in two years now, and he probably won’t be able to go for another year. After 7 years of blood transfusions, he finally had a chance of a permanent cure – a bone marrow transplant. However, his fight isn’t over yet. He still has high blood pressure, he can’t leave the house because he’s susceptible to infections and has to go to the hospital in Delhi every 10 days for a checkup.


“After he got the bone marrow transplant, he was in the hospital for nearly a month. He had a bleed in his brain and at that moment we thought we had lost him. He also had recurring seizures. But he made it! Now he has 9 medicines every day, and he can’t do everything that other children his age can yet. It will take him 2 more years to fully recover.”

Hamza needs continued medication and blood tests every 10 days to ensure that his thalassemia doesn’t relapse. Otherwise, all the pain he and his parents, Afsar and Gulzar Begum have been through will be for nothing.

Just when they thought their struggles were over, their youngest was diagnosed with the same disease

Afsar has spent Rs. 4000 every month on Hamza’s blood transfusions. In addition, he also spent Rs. 9 lakhs on Hamza’s bone marrow transplant – all of which was borrowed from friends and family. Afsar works in a bangle factory in Firozabad and earns Rs. 3,000. He has been spending more than he earns for years now.

“I owe a lot of people a lot of money now. Just when we thought our troubles were behind us, we found out that our younger son has thalassemia. Now we spend 4000-5000 every month on his transfusions too.I don’t have any way to continue Hamza’s treatment under these circumstances, and without the medicines, Hamza’s body will reject the transplant.”

The financial and emotional strain on Afsar all these years has been immense. He even borrows money for bus tickets from their hometown to Delhi now. Hamza wants to go back to school, he wants to play with his friends – but he can’t unless he finishes the course of his treatment.

Little Hamza needs hope now more than ever. He thinks his disease will kill him. Hamza needs continued treatment and care to survive this terrible disease and only you can help him. 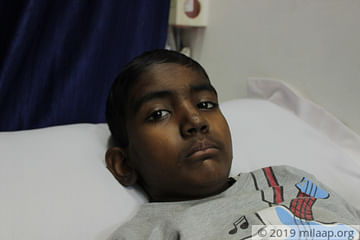 "Abbu jaan, it hurts so much, I think I'm going to die"

Hamza has lived with Thalassemia for 8 years. He needs your help to completely beat the disease.