“We Had Heard About Cancer, But Never Knew It Could Happen To Kids Too” | Milaap
loans added to your basket
Total : 0
Pay Now

“We Had Heard About Cancer, But Never Knew It Could Happen To Kids Too”

Shares
Shares
Share on whatsapp
As a baby, Girish used to fall sick very frequently. His parents, both daily wage workers would rush him to a nearby doctor, who would prescribe some medicines. However, his condition only worsened. It was an episode like this when the fever lasted over 3 months that they realized it could mean more.

“Even then, we thought Girish had dengue and went for a blood test. We do not really have big doctors and hospitals around. Even if we do, we cannot afford that. We make around Rs. 200 a day each, and it’s a family of 5 including my older son and my mother. To us, having to go to the hospital means having to spend the money we are missing with the day’s work.”

A disease more dangerous than Cancer:

“I will never forget that evening, the overnight bus to Bangalore, and the diagnosis that came after. My little son was suffering from a disease worse than cancer. He needed to be given blood constantly so that I could keep him alive. This meant many more trips to the big city, many more days of missing work, maybe many days of my family going hungry.”

Girish was diagnosed with Thalassemia Major, a blood disorder that requires regular blood transfusion. The only way out was chemotherapy.

“My wife had to stop working. Now, it was the 5 of us, and just my wages. We had to accommodate the trips to the hospital, and the treatment as well. That itself would cost us more than twice our household income.”

After this, the family’s life changed forever. They had no money to run their day-to-day expenses. Girish’s father Basawana Gowda cannot even pronounce the word Thalassemia. He only knows it is dangerous and can consume his little son entirely.

Chemotherapy is not helping Girish anymore. He needs an urgent Bone Marrow Transplant in order to live. The procedure is estimated to cost over 12 Lakh.

“They say that I still have a chance to save him. As his father, I would go to any extent to save him, and I hate feeling so helpless. He’s too small to battle death. He has barely seen life. I really don’t know who you kind people are, but to me you all are Gods. I can only pray and hope I can give my son this second chance at life,” his voice breaks.

Girish’s mother thinks it’s the aftereffects of dengue. She is not aware of the real diagnosis or the real danger. She will not even be able to bear the thought of it

Your support can give this little boy a second chance at life. 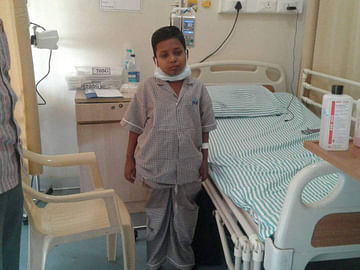 Chemotherapy is not helping Girish anymore. He needs an urgent Bone Marrow Transplant

Girish’s mother thinks it’s the aftereffects of dengue. She is not aware of the real diagnosis or...