Dipaa Was Given Gastric Medicines When She Actually Had Breast Cancer. Help This Mother In Her Fight Against Cancer | Milaap
loans added to your basket
Total : 0
Pay Now

BB
You are sending a message to
Bhargavi Bobbili
Go back

Dipaa Was Given Gastric Medicines When She Actually Had Breast Cancer. Help This Mother In Her Fight Against Cancer

"It hurts a lot to see my mother lying down for a long time. We are still so young, and she is so sick!"

These are the words of Namisha, Dipaa's17-year-old daughter. Dipaa, the mother of three children, has been suffering from breast cancer for the past two years.

Dipaa's husband of 20 years- Kishore Kumar is part of a small family owned business in Assam. They are tea suppliers to small time businesses. The couple have three children- 17 year oldNamisha, a daughter in class 7, and a son in class 2.

When was she diagnosed?

In October 2014, Dipaa had breast pain and consulted with the local doctor in Assam. She was told that she has gastric pain, and prescribed a course of gastric medicines. That seemed to solve the problem. However in Dec 2014, she had a lot of pain and went to the doctor again. This time the doctor recommended a biopsy test and the result came back positive for cancer.

In January 2015, Dipaa was diagnosed with breast cancer. She underwent removal of her right breast at Delhi. However, she had to rush back to Assam for personal reasons before the stitches could be removed. The stutches were removed in Assam by a local doctor, and the operation went bad. Dipaa had to undergo a course of skin grafting.

Dipaa underwent 6 courses of chemotherapy and 15 cycles of radiation in 2015. After the cycle, the family thought she was cured, and did a test to verify the same. On 12th April 2016, they did a PET-CT test and that revealed that the cancer had come back, stronger, and was spreading.

Dipaa underwent another 6 rounds of chemotherapy before the doctor put her on oral medications. In February 2017, she took a final PET-CT test to determine whether she was cured.

The result? The cancer was back, was stronger, and was spreading in her left breast

Over the last two years, Dipaa and her husband have spent lakhs on her treatment. They have approached family members for help, and have spent their entire life savings on this treatment. The latest diagnosis means that Dipaa has to pay  Rs 12 lakhs again for her next treatment.


Namisha is currently giving her 12th CBSE Board Exams in Assam. The 17 year old handles the household work in the morning, takes care of her younger siblings, and studies at night. She has to do this alone as her parents go to Delhi once every month for Dipaa's chemo.

"My brother and sister are really scared as they are young. I tell them Mumma will be fine, it's going to be OK, things will be normal again. But I'm really scared."

Dipaa has been battling bravely over the last two years to stay with her family. 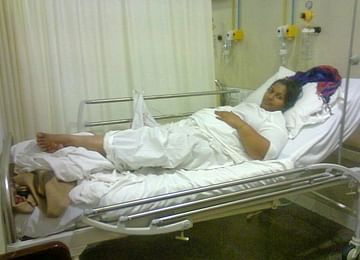 Dipaa has been battling cancer for two years. She needs help to undergo the final treatment

Her children are aware she is fighting for her life, and are terrified. Help fund the treatment...