This 10-Year-Old’s Cancer Has Made Him Unrecognizable, He Cries In Pain Every Day | Milaap
loans added to your basket
Total : 0
Pay Now

You are sending a message to
sswpmmax
Go back

This 10-Year-Old’s Cancer Has Made Him Unrecognizable, He Cries In Pain Every Day

“That day my wife, Gunjan suddenly asked me to take a picture of our son, Daksh. ‘He smiled after almost a week. God knows, when he will smile again, take a photo please,’ she said. I looked at her with tears in my eyes. Is this how it’s going to be for the rest of our lives - will he even make to the rest of our lives?” - Sanjeev, father.

Daksh (10) has a severe form of blood cancer. His body doesn’t produce enough blood, he needs transfusions almost every other day. He also needs continued chemotherapy and radiation. That’s the only way he can get better. But the cost of his treatment is beyond the means of his family.

They got good news and bad news 7 months ago

7 months ago, Sanjeev and Gunjan were very happy to know that she was pregnant. They had so many plans for their baby when they noticed a suspicious swelling in Daksh’s neck.

“He said it wasn’t hurting but we were not convinced. Daksh has always been a naughty child, we thought he got hurt somewhere. Still we wanted to double check and took him to the doctors. They initially told us that there is nothing to worry but then Daksh got a swelling on the other side also, we knew it was dangerous. Tests only confirmed our fears. My son was diagnosed with cancer.”

The parents were left in a terrible dilemma - they didn’t know how to celebrate the good news when their son was battling deadly cancer.

Papa, it’s burning inside me - please make it stop

Daksh is only 10 and he has already undergone 6 rigorous sessions of chemo. They had to shave the little boy’s hair, he was upset and angry but they had no choice. He has now become very irritable, he feels like his insides are burning when he is given the chemo. He doesn’t want to talk to anyone, not even his mother. He spends most of his playing games on mobile.

“He used to be so fun-loving. He would always be up to some mischief and look at him now. He is weak, often runs a high temperature. He hasn’t had a peaceful night’s sleep for so long now. The body pain increases at night, the dosage of painkillers is increased but he is still very restless,” - Gunjan.

Gunjan and Sanjeev can't help but shed tears when the look at their son. The harsh chemo has changed him so much. Their lively Daksh is no longer the same.

Gunjan is 7 months pregnant. A little baby is growing inside her but this mother is spending sleepless nights thinking about her son. She is worried about both of them.

Sanjeev has a shop in Delhi where he sells dairy products. He earns decently but for the last few months, he hasn’t been able to go to work at all.

“I haven’t kept a count of the amount of money I have spent on Daksh’s treatment. It should be something around 30 lakhs. The doctors are saying that we would need another 7 lakhs. You’re my only hope now, please save me,” - Sanjeev.

He is only 10 and has an entire life ahead of him. His parents can't afford his treatment - they are looking up to you for help. A small contribution will make a big difference in their life 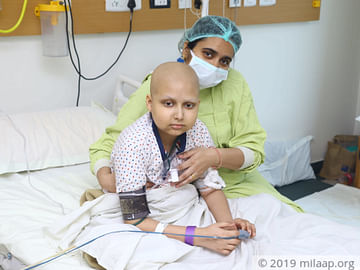 Daksh is only 10 and he has already undergone 6 rigorous sessions of chemo. He needs treatment

UPI: givetomlpsanjeevkumar1@yesbankltd (Copy to clipboard)
Or
Click here to read the instructions before you make a bank transfer.