4 Years On Dialysis, 1 Transplant And Still This Cricketer Is Battling For Life | Milaap
loans added to your basket
Total : 0
Pay Now

s
You are sending a message to
satyamdixit36
Go back

4 Years On Dialysis, 1 Transplant And Still This Cricketer Is Battling For Life

Shares
Shares
Share on whatsapp
25-year-old Aditya is facing a nightmare. Aditya is suffering from renal disease and he needs an urgent kidney transplant.

A small and happy family

Aditya hails from Kanpur. He has a younger sister Neha who is 20 years old. His father Vinod runs a small photo studio in their hometown.  Aditya started playing cricket in 2002, and he was a promising cricketer. He was a State Level player, in the under 16 category. Things were fine until 2009, when he had to stop playing cricket.

In 2009, Aditya was diagnosed with kidney failure

He spent four years going through dialysis. Later, doctors at Fortis hospital informed him that the only way out was a kidney transplant. Vinod donated a kidney to his son- and the operation was performed successfully.  The family thought that their troubles were over.
Aditya began to resume his normal routine and passed the umpiring exam in Kanpur. For over a year, he umpired the matches at Kanpur Cricketing Association- over 100 matches. Life was back to normal until his feet started to swell up.

Doctors had previously explained to him that his body could reject the kidney anytime- 1 year or 1 month after the surgery. Aditya's family had been hoping for the best. After Aditya began to work again, the family was just beginning to relax when they got the shock that Aditya's kidney was failing again.

Four years after his surgery, Aditya needs a second surgery

Aditya and his family are struggling to pay for his dialysis expenses. They cannot even imagine paying for his kidney transplant.
This time, Aditya's mother will be his kidney donor. The transplant operation is complicated because Aditya has an A+ blood group but his mother has an AB+.

Aditya’s family sold their house to pay for the first operation. It cost over 20 lakhs including the four years of dialysis. Now Aditya spends nearly Rs 8000- Rs 9000 per week for his dialysis. He has exhausted all his options.
Cricketers such as RP Singh have helped Aditya out. His friends have also helped him with his dialysis expenses- but the cost of the transplant is beyond what they can afford.

Aditya has been scheduled for a kidney transplant with his mother as the donor. The family cannot afford the cost of the operation. Aditya has fought and won against this disease once- he hopes to do it again.
Your contribution can help Aditya live a long life. Contribute here to save Aditya!

Click here to contribute to Aditya or for more details on this campaign.
Donate 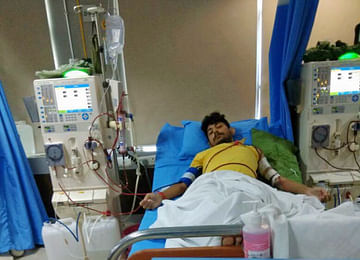 He has been suffering for over 8 years, and needs an urgent kidney transplant