2-Year-Old Can’t Even Lie Down On His Back Because Of A Cancerous Tumour | Milaap
loans added to your basket
Total : 0
Pay Now

Shares
Shares
Share on whatsapp
One day, baby Bhuvaneshwar stopped walking. In fact, he couldn’t even move his legs. Now this wouldn’t have been so shocking if just a day before this, he wasn’t walking around the house, while Sumitra chased after him with his bowl of food. The day he stopped walking, he cried all night in pain, his little body trembling every time they placed him on the bed. No one knew what was happening. A week later, Umesh and Sumitra found out their baby had a tumour – a cancerous tumour in his spine.


“It was blocking the blood circulation to his legs. He’s only a baby, barely 2…he didn’t know what was happening to him or why suddenly he couldn’t play like he used to. Ever since he started walking, I just couldn’t catch him..but now he begs and cries for me to carry him all the time.” – Sumitra, mother

Bhuvaneshwar’s tumour is so malignant that it’s hard to differentiate between the normal cells and the cancerous cells. It’s rapidly growing and as the minutes go by, this baby’s pain is only getting worse.

He’s so exhausted and in pain all the time, but he can’t even lie down to rest

The tumour on his back is growing. It doesn’t let him sleep or even pass stools without being in pain. He now has to do that through a hole in his stomach. He has been in and out of the ICU, he has numerous medicines and injections every other day. His pain seems never-ending.

“No one ever prepares you for the moment you’re told your child has cancer…who even imagines it? I couldn’t believe it at first. I thought my God wouldn’t do this to my son…which God would?” – Sumitra

When I carry him, all I can feel are his bones

There was a time when baby Bhuvaneshwar was the light of his home. Everything they did, revolved around him. He would laugh and play, there was never a dull moment. But now, Umesh and Sumitra can’t remember the last time he smiled. He’s so weak, only 8 kgs

“It’s been 2 months since we found out, but it feels like years. Years since we came to Bangalore from Dharwad, years since he’s been in pain…but we can lose him in minutes if he doesn’t get chemotherapy in time.” - Umesh

There is hope for Bhuvaneshwar, he can be saved with 6 months of chemotherapy. But only if his poor parents can afford it in time.

Umesh is not only running out of time, but also money. The 2 lakhs he had borrowed for Bhuvaneshwar’s numerous tests, scans and injections are now over. He hasn’t gone for work, hasn’t earned anything in two months. Umesh works in a small cycle repair shop in Dharwad on a minimal income. On some days, this income isn’t enough to even feed his family, but still, he tries.

“We need lakhs of rupees, and I haven’t ever been able to save money even in thousands. Sometimes I go back home to try and arrange for money…I’ve returned empty-handed every time. How will I live with myself if I can’t do even this much for my son…” - Umesh

You can see the pain in his eyes, you can see he’s struggling. The only way he can fight cancer is with your help. He’s running out of time. You’re his only hope. 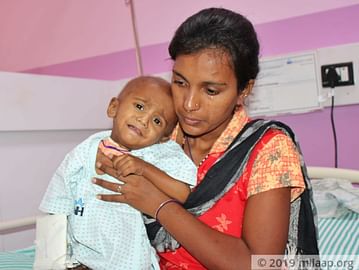 He's Only 8 Kgs Now, Cancer Is Making Him Weaker By The Minute

This 2-year-old needs chemotherapy to fight cancer. You're his only hope.

UPI: givetomlpumesh6@yesbankltd (Copy to clipboard)
Or
Click here to read the instructions before you make a bank transfer.