AH
You are sending a message to
Archana Harish
Go back

Teenager Who Wants To Be A Police Officer Is Battling Deadly Cancer, Needs Urgent Treatment

"He was just 5 when he said , "Amma, when I grow up I want to become a police officer." We told him that he has to be physically very strong and fit to become one. Since then, he has always had healthy food and never craved for sweets and fast food. He wakes up early in the morning and does exercises. He has never fallen sick all these years, not even a headache, but now, medicines and injections have become his routine. Cancer has taken away all his energy and strength. He has lost all his hope and happiness." - Mallika, mother.

His abdominal pain turned out to be something dangerous

It was very unusual for Barath to feel tired and exhausted but last month for almost a week he looked weak because of his abdominal pain. He had a burning sensation and when it kept increasing his parents took him to a local hospital. He was given injections but pain did not subside. After a week, they took him again to the hospital and the scan reports confirmed that he has a cancerous tumor in his pelvic region (which provides support for the intestines and also contains the bladder and reproductive organs).


"We couldn't believe it all, we were crying uncontrollably. We asked the doctors to take another scan and confirm but they said we shouldn't lose any time and take him to a hospital in Bangalore before it gets too worse. We didn't have the strength to tell him, we told him he has infections but he found out after seeing the scan reports." - Chinnaswamy.

Barath has completed 3 cycles of chemo, he needs 13 cycles of chemo and a surgery without which cancer will spread to other parts and turn fatal. He hardly eats and spends sleepless nights. He is in constant pain and in these 2 days he has become too weak and has a stoma bag to help him pass stools. He vomits everything he eats and also suffers from  mouth sores due to high dosage of medicines.


"He had not spoken a word about his condition to us, I see tears rolling down his eyes. He feels extremely sad that he is dependent on others even for his basic activities. We tell him that he'll be fine soon but he feels completely defeated. He doesn't want anyone to see him in this condition, he asks us not to tell anyone." - Chinnaswamy.

"I have sold my land and the jewellery I had saved for my daughter's wedding, yet it is not enough"

Chinnaswamy had a small piece of land and he sold it as soon as his son Barath was diagnosed with cancerous tumor, with that he managed to come to Bangalore and started the treatment. He had saved jewellery for his daughter Jeevitha's marriage (21) and he sold that too. He spent 2 lakh so far and he needs 10.40 lakh more to continue the treatment. He is a daily wager, works in a farm and earns Rs 200 per day. Now he and his wife stay in his relative's place who is also a daily wager. He has nothing left with him and fears he may not be able to continue the treatment.


"I don't know how long I can stay in my relatives's place, they are helping us in all the ways they can but they are also poor. My son knows that I cannot afford the treatment but I keep telling him I will save him at any cost, I can't fail him. He deserves  a life, please help him." - Chinnaswamy.

Barath's only dream is to become a police and he worked hard for it from his childhood days, now cancer is killing him slowly, without your  help he'll lose his life.

The specifics of this case have been verified by the medical team at the concerned hospital. For any clarification on the treatment or associated costs, contact the campaign organizer or the medical team.
Click here to save Barat
Donate 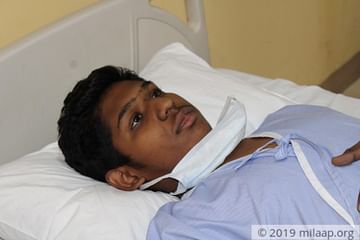 He needs 13 more chemo cycles and a surgery to recover completely.

UPI: givetochinnaswamy1@yesbankltd (Copy to clipboard)
Or
Click here to read the instructions before you make a bank transfer.