Infections, Breathing Problems, Low Platelet Count - My Premature Son Has Faced It All And Is Struggling To Live | Milaap
loans added to your basket
Total : 0
Pay Now

You are sending a message to
Tejaswi RO
Go back

Infections, Breathing Problems, Low Platelet Count - My Premature Son Has Faced It All And Is Struggling To Live

Shares
Shares
Share on whatsapp
When people say a woman glows when she is pregnant, they are absolutely right – Thamseen exuded happiness when she conceived our baby - Yusuf. Her joy reflected in everything she did. In our three years of marriage, we had never been more content with life. We were going to be parents and we couldn’t wait. Maybe that’s why Yusuf was born much before he was supposed to.

Thamseen had just completed 6 months of pregnancy that day. Everything was going well -- we had gone for a close relative’s wedding and returned. She was preparing to cook something that night when her water broke suddenly. She screamed and I ran to the kitchen. I couldn’t believe that this was happening and rushed her to the hospital.

The doctor, even without checking properly, told us that she may have to do an abortion. Thamseen and I looked at each other – blank and speechless. How easily she said the word ‘abortion’ to parents who were eagerly waiting to see their baby’s beautiful face. We said no, we were not going to give up on our baby. How could we? But the doctor had already applied some gel to her cervix, that would prove disastrous later.

My wife was advised complete bed rest. She could still feel the baby move so we were not very worried. I felt relieved when I put my palm on her stomach to check on our child. He was safe in there, I assumed – but that changed soon when Thamseen observed blood in her urine one day. We went to the doctors immediately, and they said that my unborn baby was at the risk of contracting a deadly infection. He had to be brought into the world soon. An emergency C-section was performed and baby Yusuf arrived on February 19, at 6 and-a-half months of being in the womb.

He was not equipped to survive from the beginning - he was battling infections, could not breathe on his own and his platelet count was very low. I did not see how his small face looked, as it was covered with many tubes.  For the first 32 days, we were not allowed to touch our baby as he was in the NICU on ventilator support. He underwent blood transfusion four times!

My baby has only dealt with sickness since he arrived in this world. What did he do to deserve this? My wife was not herself in the days she could not see our son. Today that has changed because he is now in the step-down NICU now. She can hold him, but cannot nurse him - he is fed through tubes. Doctors say his breathing needs to stabilise for him to start feeding by himself. When I see his small, pink body, I pray. I pray that tomorrow will be better than today. That he will start breathing properly one day and that we will all live happily.

I work under a contractor in the construction business, but I am not able to go to work regularly. My contractor is a kind man and has not fired me yet. For me, my child is number one priority. I will do anything for him, but I have already spent close to Rs 4 lakh on Yusuf’s treatment. I need close to Rs 2 lakh more as the baby needs to spend at least 25 days more in the hospital.

His lungs need to develop and he needs to gain weight or he will not survive. Recently, the doctors tried to see whether he could breathe on his own, but he cried and cried and turned blue. My heart almost stopped. My son is still fighting and needs more time to be alright. I have nobody to help me — I have sold off my wife’s jewellery and every expensive thing we had. Help me. 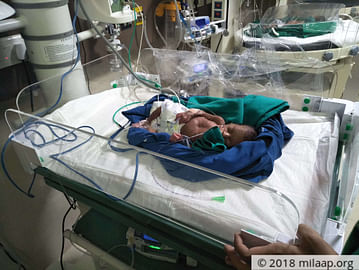 Give baby Yusuf a chance to survive