Save This Tea Seller’s Only Child Who Is Starving Due To A Block In Her Intestines | Milaap
loans added to your basket
Total : 0
Pay Now

Shares
Shares
Share on whatsapp
Santosh’s day starts early in the morning when he opens his small tea shop and starts preparing tea for his customers. As he is getting ready for his day, he looks onto the city that is just  waking up.

“I see fathers holding their daughter’s hand and taking them to school. Previously, I used to smile on my own and think that one day even I will take my daughter to school. So when a baby girl was born to me, it felt as if God has answered all my prayers.” - Santosh, father of 1-year-old Supriya.

But the young parents' dreams were shattered

Supriya had jaundice just after she was born and had to stay in the NICU for a week. The young parents were anxious about their newborn but were relieved when they brought her home. However, Supriya’s health was not getting any better. She was in and out of hospitals and several tests were performed. Finally, the parents got to know that their baby has intestinal atresia which means she has a blockage in her intestines that does not allow the food to get digested and also to get excreted from the body.

“Supriya hasn’t been able to eat anything at all for the last few weeks. She throws up everything that she eats. Her vomit is green in colour and she winces from the stomach ache. She has frequent high fever and she tosses and turns in the bed. My wife, Pooja and I try to do everything in our hands to comfort her but nothing eases her pain.”

Even after surgeries, little Supriya is not anywhere near recovery

“Supriya was 6 months old when we got to know of her medical condition. The doctors said that without a surgery my baby could not be saved. The surgery was performed and Supriya was getting better. But just after few months, things started worsening. She started vomiting again and got stomach pain. We had to take her to the doctors who told us that they need to perform another surgery on our baby. Pooja broke down in the doctor’s chamber itself. I held her hands as we agreed for the surgery, thinking that it will save Supriya’s life. Now, as I see her lying on the hospital bed, I desperately hope to get her back home.”

Pooja gets only 1 hour in the NICU with her baby

Santosh works as a tea seller and earns Rs 250 per day. He is the only earning member of his family and needless to say that his income is not enough for the family. Santosh had to borrow from his friends and relatives and arranged for Rs 3 lakhs for his daughter’s treatment. The doctors have said that Supriya needs to stay in the hospital at least for a week and that would cost him another Rs 1 lakh 73 thousand rupees. Santosh is in severe debt and in no condition to afford his daughter’s treatment.

1-year-old baby Supriya is in a critical state and needs to stay in the NICU for another week. Her parents are very poor and are unable to afford the treatment that can save their daughter’s life. Your kind contribution can bring the smile back on little Supriya’s face.

Your support can help save this baby's life 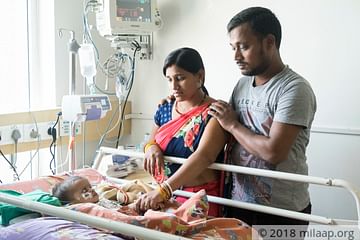 1-Year-Old Is Unable To Eat Anything, Needs Urgent Treatment To Live