21-Day-Old Baby With Twisted Intestines Can Survive Only If You Help | Milaap
loans added to your basket
Total : 0
Pay Now

GS
You are sending a message to
Gautham Sai
Go back

Every hour, Nandhini tries to listen to her son's breath, checking to see if he is still alive.

She worries that her husband will not be able to pay for the surgery that can save their son. He is just 21 days old. He has been fighting for his life in the ICU since he was born. They have not taken him home. They have not thought about naming him. They have not even bought clothes for him. All they want is to save his life.

"There was blood coming out of his diaper"

When a baby is born, the doctor advises parents to watch the poop. At first, it will be black, then green, and then turns gradually, to yellow. This is normal, they say. Nandhini knew something was wrong when her son was struggling to feed after birth. It was worse, watching him strain to pass stools.

"For one day he did not poop. The next day night, I felt wetness under him. There was blood. I screamed for the nurse. They took him into surgery." - Nandhini

Nandhini's water broke and it took several hours before her baby could be delivered. The baby had swallowed the amniotic fluid along with meconium (poop). He was under observation for 2 days when he was diagnosed with malrotation. His intestines were twisted.

"They removed the dead bowel. They put his intestines back in place. Because it was not working before it is not able to absorb nutrition from her milk. He is still in pain, not able to drink milk or pass any more stools. He is not getting enough food to grow." - Thangamuthu (Father)

"He needs another surgery, and I have no money"

Nandhini's son cries loudly when he is hungry. She is not able to feed him. He gets his nutrition from a pipe in his thigh that goes to his stomach. The doctors hope that with time, his intestines will develop and start working better. However, he needs another surgery.

"My husband helps in dying clothes. He gets Rs. 400 per day. His owner lent us Rs. 40,000 for the initial hospital deposit. Now we have no money left. I am an orphan. His parents threw us out because we married for love against their wishes. We feel so alone right now unable to save the only family we have." - Nandhini

Only you can help save this baby boy

Thangamuthu's friends pooled in money and helped arrange Rs. 4,300. To avoid spending on food, he cooks for his wife every day and walks to the hospital that is 5kms away. Despite all this, he is unable to arrange for the estimated cost of treatment.

"My son needs to be in the ICU for weeks. He needs this surgery also. It will cost us 6 Lakhs. Where will I get that? I don't want to see him die." - Thangamuthu

Thangamuthu and Nandhini are glad that they get to spend time with their baby throughout the day. They keep taking turns to hold his hand and listen to his breath. They feel happy when he opens his eyes to look around. However, they still need your help to save their baby boy and have a happy ending for their family. 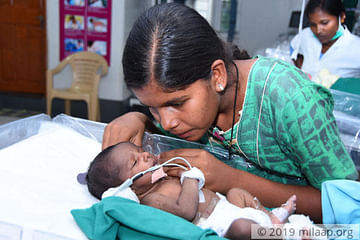 We Don't Even Have Our Family To Help Us

Love marriage made this couple outcasts in the society. They are fighting to save their child alone.

UPI: givetonandhinifunds1@yesbankltd (Copy to clipboard)
Or
Click here to read the instructions before you make a bank transfer.