She Was Born To Them After 7 Long Years, Now These Parents Have Only Few Hours To Save Her | Milaap
loans added to your basket
Total : 0
Pay Now

She Was Born To Them After 7 Long Years, Now These Parents Have Only Few Hours To Save Her

"I look around the hospital and I see other parents come and go with their newborns, smiles on their faces. I look down at my daughter and cry. 'Why can't that be us?', I ask God." - Ramesh, father

Seven years after their marriage, when Ramesh and Lavanya had found out they were finally going to have a child, they had been ecstatic because they had almost given up hope. All their prayers had been answered. But now the newly turned parents can't even remember what happiness feels like. Their newborn, their miracle, is slowly suffocating to death. Her skin was turning blue, and her breathing getting more rapid, more insistent.

"She's so small, just 13 days old. We haven't even named her yet. And without surgery she'll die."

This is the nightmare world in which Ramesh finds himself now, the father of a beautiful newborn girl who was diagnosed with a heart disease mere days after her birth. Her fragile body is unable to get enough oxygen to live. Ramesh had been stunned when the doctor had first told him of the condition. As Lavanya lay there, sleeping, still recovering from an emergency c-section, the doctor had pulled him aside to say "Your daughter has a heart condition. She may not live for long. We cannot treat her here, but there's another hospital. She may have a chance there."

A surgery today is her only hope to survive

Not knowing what to do, Ramesh had left Lavanya there and taken his precious daughter to the recommended hospital, where they explained to him that this was a rare congenital heart disease that affects only 0.03% of the world's population, and the only hope he has of saving his baby girl from it is to get a stent inserted into her heart: a surgical procedure that will cost 2 lakh rupees. Money that he does not have. What little money he had saved up he had to spend on getting his wife the c-section.


"I'm just a barber. All my family members are barbers. Where can we get that kind of money? We went to everyone we knew who might be able to help and begged them to help us. Some of them asked us to give up."

After being hospitalized for more than a week, separated from her child, Lavanya has barely even been given the time to hold her baby girl. The idea of giving up on their little miracle is unimaginable to both parents. But what can they do? They need your help.

The specifics of this case have been verified by the medical team at the concerned hospital. For any clarification on the treatment or associated costs, contact the campaign organizer or the medical team.
Click here to save Lavanya's baby
Donate 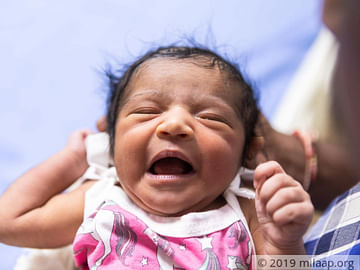 A Surgery Today Is This Newborn's Only Hope To Survive

Lavanya and Ramesh's baby girl needs to get a heart surgery at the earliest. You can help save her.

UPI: givetorameshdonations1@yesbankltd (Copy to clipboard)
Or
Click here to read the instructions before you make a bank transfer.