These Twins Are Their Widowed Mother's Only Chance At Happiness Now | Milaap
loans added to your basket
Total : 0
Pay Now

BS
You are sending a message to
Babita Sehrawat
Go back

These Twins Are Their Widowed Mother's Only Chance At Happiness Now

Shares
Shares
Share on whatsapp
When everything in her life was going downhill, Kamlesh was told she was going to be the mother of twins. She depended wholly on them to bring back the long-lost happiness into her life. But today, they depend on her for their very lives and she can’t promise them that. Having been born after just 26 weeks of pregnancy, the babies are extremely weak; and as fate would have it, they are now in the NICU, battling death…

She lost her son, and then her husband, within just a few months of each other

A year ago, one day, Kamlesh's son went missing. After a frantic night of searching everywhere, the next morning, she came to know that the body of a boy was waiting to be identified in the hospital.

“When we went there, they lifted the sheet off the body’s face, and... and it was my son! He had been found on the tracks, they told us; a tragic accident. I still mourn for him!” – Kamlesh

After months of mourning, Kamlesh and Harswaroop decided having a baby would help them heal. But just weeks after Kamlesh discovered she was pregnant with twins, her husband was diagnosed with end-stage lung cancer. Then, within weeks, he passed away too.

Her babies were born while she was under extreme stress

Unable to bear the loss, Kamlesh suffered from stress-induced hypertension. She began to fall sick often and grew weaker by the day. During her 6th month, left with no choice, she underwent surgery to give birth to a boy and a girl, both weighing no more than 800g each.

“From the moment they were born, they began to battle death. I am so afraid I’ll lose them too.” – Kamlesh

The babies are suffering from a severe respiratory distress syndrome and sepsis. Without life-support, they stand no chance of living for even a minute. They can make it, with 3-4 more months at the NICU, but the treatment will cost Kamlesh 18 lakh rupees.

There’s not an earning member in the family, and Kamlesh is helpless

Her husband was a farmer who earned no more than 10,000 a month. Now Kamlesh is left with no money, and two newborns to save. She has borrowed from friends and relatives far and wide, but it’s not enough.

“It’s been 3 days now I've gotten admitted in the hospital again. I have no money for my own treatment, and even if I did, I'd just spend it on my babies. I have seen it all, suffered it all. I don’t have the strength to bear any more death. Please help me save the babies, they’re my only hope!” – Kamlesh

Only the twins can save this woman; but first, they need to be saved. Your generous contribution can help Kamlesh take them home.
Donate 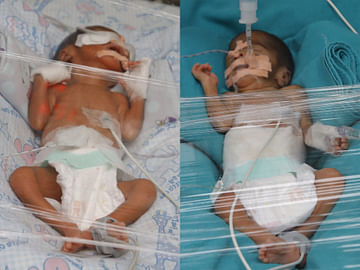 She Is All Alone In This Fight To Save Her Twins, You Can Help

Having lost her son and her husband, she can't afford to lose her twins too. You can help her.

UPI: rzpy.givetomlpkamlesh0010@hdfcbank (Copy to clipboard)
Or
Click here to read the instructions before you make a bank transfer.