5-year-old Larshini Has To Depend On Others For Blood, Without A Surgery She Will Lose Her Life | Milaap
loans added to your basket
Total : 0
Pay Now

5-year-old Larshini Has To Depend On Others For Blood, Without A Surgery She Will Lose Her Life

"Every time I come closer to the date of a transfusion, I fear that I will lose my daughter. How will she survive if I fail to pay in time? I can't imagine that. It makes me feel like the worst father in the world." - Balaraman

Vanitha and Balaraman were a happy couple and living a modest life in a village near Trichy. Their children Vasekaragan (7) and Larshini (5) are the source of their happiness. This joy was completely shattered when their youngest daughter Larshini was diagnosed with the dreadful disease Thalassemia. Now only a bone marrow transplant can save her life.

Larshini was completely healthy when she was born. She grew up perfectly well until she turned 2 years old. She had a terrible fever and within a day, her head and stomach were swollen. Vanitha was terrified and she rushed her to a local hospital. She was diagnosed with Dengue and was given medications. Her condition kept deteriorating. A couple of tests confirmed that she has Thalassemia and might not survive for long without constant treatment.

Balaraman was out of town and Vanitha with the little money she had in hand rushed to CMC hospital Vellore. Scan reports confirmed the same. Thalassemia is an inherited blood disorder in which the body makes an abnormal form of hemoglobin. This will result in an excessive destruction of red blood cells.

It has been two years since the diagnosis and ever since that little Larshini is going through immense pain and trauma. Every month, she needs blood transfusions. Sometimes her condition gets so bad that she needs new blood every two weeks. Doctors said that only a bone marrow transplant can save her from the lifetime of painful blood transfusions.

"She is playful in nature, she likes to play around but it lasts only for few days. She then becomes extremely weak and loses her appetite. It is only after another round of blood transfusion she regains her energy." - Vanitha

Balaraman met with an accident and unable to work

Vanitha and Balaraman have struggled beyond words to pay for the monthly blood transfusion. Balaraman works as a driver and was working day and night to manage the expense. Unfortunately, 2 months ago, he met with an accident damaging his legs. Doctors have advised him to take bed rest. It came as a blow to the family when he had to stop working.

Vanitha is physically and emotionally exhausted. She has to handle everything single-handedly. Larshini is getting treatment at Apollo Chennai for now. She needs to start her chemo cycles before the bone marrow transplant. Unfortunately, Vanitha borrows money even for her travel expense, and does not even have a rupee to continue with the treatment.

Vanitha has no source of income now and the family has exhausted all their savings. Little Larshini is longing to get back to home and live a normal life. She has a chance now with bone marrow transplant to be free from the painful blood transfusions. Her parents now bank on the generosity of the strangers. The treatment cost comes around Rs 17 lakhs which is beyond their means.

Your contribution can free Larshini of this pain and give her a new life. 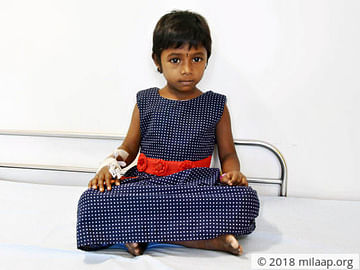 Larshini needs an urgent bone marrow trasnplant and her parents are struggling to save her.