This Baby Is Fighting For His Life Again, But This Time His Parents Can't Save Him | Milaap
loans added to your basket
Total : 0
Pay Now

This Baby Is Fighting For His Life Again, But This Time His Parents Can't Save Him

Akbar had turned to look into his wife’s teary eyes, then at their baby boy in her arms. They had already fought this battle. They had thought they won. But now, at just two months old, their son was on the verge of death ... again.

A few weeks after his birth, Akbar had rushed baby Hamza to the hospital when he noticed his son was gasping for air. After a week of being hospitalized, his son was diagnosed with a rare form of heart disease.

“They told me he needed surgery straight away. And that it was going to cost ₹2,00,000. I had already spent approximately ₹50,000 on the tests and hospitalization. Two lakhs… Two lakhs was beyond me. I’m just a mechanic.”  – Akbar, father

But Akbar had managed. He had had to. It had taken him a week to gather the funds. He sold most of his possessions, took a loan against every ounce of gold his family owned, and borrowed the rest from anyone and everyone who was willing to help. He even had to postpone his young sister’s wedding, which was set to happen next month; he could no longer afford it.


“I knew life would be so much harder than before, that I would be heavily in debt, that I would take years to recover. But it would all be worth it, I knew, if I could save my baby’s life.” – Akbar

The surgery had been successful, and he had taken his son home soon after. But now…

“It’s all so unreal. Like reliving a nightmare. He’s so young! A baby! He shouldn't have to fight for his life at all, but having to twice?!” – Risaalat, mother

These parents put everything on the line to save their precious baby's life last time. Now he needs help again, but they can't afford the treatment. Some well-wishers told them they had tried their best. They suggested they should prepare for the worst, and enjoy what little time they had left with their son.

But would you? Could you?

If you don't think this family should be going through so much pain, then donate now, and help save baby Hamza's life.

The specifics of this case have been verified by the medical team at the concerned hospital. For any clarification on the treatment or associated costs, contact the campaign organizer or the medical team.
Click here to donate.
Donate 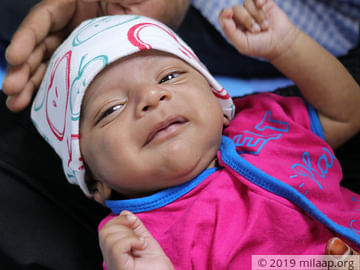 This Baby Is Gasping For Breath, And Fighting For His Life Again

His parents saved his life once already. They cannot afford the treatment a second time.

UPI: givetomohdakbar1@yesbankltd (Copy to clipboard)
Or
Click here to read the instructions before you make a bank transfer.