Domestic Help Fights Alone To Save Her Daughter's Life After Her Husband's Death | Milaap
loans added to your basket
Total : 0
Pay Now

“My husband died because of liver failure. Had he been alive, we wouldn’t have to suffer so much. I have been living for my daughter ever since. But very soon, we found that her life is also at danger, I have been working day and night to save her, but now I fear all my efforts and prayers will go in vain. A severe disease threatens to take her away from me. But I don't have the means to afford her treatment. What worse can happen to a mother? " - Huligamma, mother of 9-year-old Govidamma

She has hardly any good memories of her childhood, all she has seen is pain

When Govindamma’s father died, she was just 4 years old, but she remembers moving out from her home to her maternal grandfather’s house, with her mother. She was too small to comprehend death and her father's absence was disturbing her. Huligamma used to tell her that her father is now with God and he is watching her from above. Just when she slowly came to terms with it, she was diagnosed with a blood disorder. Her body has stopped producing enough new blood cells. Since then until now, she has been surviving only with blood transfusions. Now, even that is not enough, she needs a bone marrow transplant to survive.


“We first took her to hospital in Bellary just to realize that she has low blood count and then we were immediately asked to shift her to another hospital. Since then we have just been coming to Bangalore, staying in a small guest house every month, with my father, paying 400 per night. She has never missed any cycle, we were hoping that she would become better one day, but we were wrong."

Govindamma  is struggling to carry on with her deteriorating health, she is very weak and tired. Her days are spent, watching television to no end. Since last one week, she has been admitted in the hospital, due to high temperature and infections in her eyes.


"I keep thinking about how she used to play outside and accompany her grandparents to the field, but since the last 2 years, it has stopped. She is too weak for all of that now.  She is mostly bedridden with no energy for anything. All I want is to see her living a happy and normal life like any other child but I fear it might never happen."

Govindamma with her mother and grandfather

Hulgiamma's parents are dependent on the small agricultural land they have for living - they hardly earn anything. She works as domestic maid to support the family. Despite their old age, her parents work hard to save Govindamma's life. Her treatment has already taken away whatever little they had and now they have nothing left to afford for the transplant that costs 25 lakhs.


“We know that just blood transfusion won’t save her but transplant is beyond our capacity. I will have no purpose in my life if I lose my daughter too, please help me save her."

Together, we can save 9-year-old Govindamma 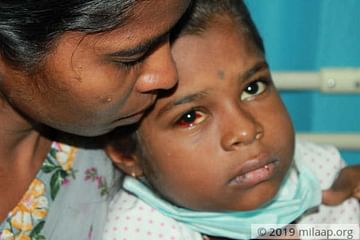 She Has Hardly Any Good Memories Of Her Childhood, All She Has Seen Is Pain

Transfusions can no longer save her, she needs urgent treatment