This Priest Cannot Afford The Cost Of An Operation To Save His Baby Girl | Milaap
loans added to your basket
Total : 0
Pay Now

VA
You are sending a message to
Venkatesh Anand
Go back

“I am a God fearing man. And I’m praying as my daughter lies in the hospital.”

31 year old Saravanan says this as his younger daughter is in Apollo Hospitals, fighting for her life. Anany is nearly 2 years old, and needs a bone marrow transplant to survive.

For over ten years, Saravanan worked as a legal executive

It was a small but happy family

Saravanan married Poorani in May 2012. The couple has two daughters- 4 year old Dhanya Mitra, and nearly 2 year old Ananya. They hail from Kanchipuram. It was a small, but happy family until baby Ananya fell sick.

It started after her first birthday

The family celebrated Ananya’s birthday with a small party for relatives and friends. A couple of weeks after this, Ananya caught a cold and a fever. She also began to lose weight.  Ananya’s mother had just stopped breastfeeding her, and the parents assumed that the weight loss was because of this.

A doctor’s visit revealed that she had a heart abnormality

Saravanan rushed his baby daughter to the Government Hospital in Egmore. Multiple tests were conducted, but everything was normal. Doctors were puzzled as to how Ananya kept getting weaker.
It was then that Saravanan was referred to Dr Revathy Raj in Apollo Hospitals.
He rushed Ananya to Apollo Hospitals. An ECHO test determined that Ananya had Severe Combined Immuno-deficiency. The only cure was a bone marrow transplantation. Ananya’s sister was a match.The bone marrow transplantion has happened.
However, she developed fungal pneumonia after her operation, and needed ICU care. The estimated cost of this came up to be Rs 15 lakhs

Saravanan is a priest in Kanchipuram. He does not earn a steady salary. A few months, he is not even called to perform any puja and has to live off his savings. The cost of the BMT operation was over Rs 18 lakhs- out of which he has received aid from the Government. The cost of her ICU care for her pneumonia is unaffordable for him. 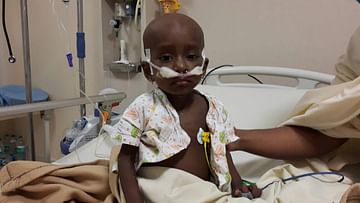 Her father cannot afford the cost for the surgery