This Poor Farmer Has Nothing Left To Save His 1-Year-Old Son's Failing Heart | Milaap
loans added to your basket
Total : 0
Pay Now

"I have no idea how I’ll save my baby. Atharva is just a year old and he’s been through so much. He fought so hard in the ICU and survived but it seems like all his battles are in vain because his heart is still failing. I have nothing to save him, I’m just a farmer and I’ve spent all my savings on his treatments up till now, ” – Shashikant, Atharva’s father.

1-year-old Atharva’s smile makes it hard for one to realise that his heart is failing and that unless he undergoes a heart surgery soon, he may not live long.  The impure blood mixes with the oxygen-rich blood causing many other issues for the little boy.

Atharva Fought Death In The ICU

“Atharva was completely okay the first few months after his birth. But suddenly, when he was just 7-months old, he found it difficult to breathe normally. Within a month, he was in the ICU fighting for his life. He had no energy and couldn’t move. He was on life support and we thought we’d lose him. He was so critical but somehow he fought and lived. We have been horrified ever since and Anita has only been shedding tears. We can’t see him like this.”

Atharva is very weak due to the heart problem. He is unable to walk due to the lack of energy and strength. His weight isn’t increasing and he’s unable to develop physically as well. He gets breathless and tired if he tries to play for a few minutes. He needs an urgent heart surgery but his poor father has absolutely nothing.

Shashikant Is A Poor Farmer With No Means

“I earn just around Rs. 7000 in a month. Until now, I have spent all my life savings of Rs. 1 lakh on Atharva’s treatments and medicines. Now I have absolutely nothing left and the people in my village can’t help me too. We live in Osmanabad which is 600 kms from Mumbai and we’ve left our 4 daughters at home too. I have 6 mouths to feed with my salary and now I haven’t been able to work as well. This is just a very hard time for me.” – Shashikant.

Shashikant doesn’t even have enough to buy medicines for Atharva, and without medicines, Atharva’s condition always worsens. He runs a high temperature.  He is in dire need of help to save his 1-year-old son Atharva.  The baby’s only hope of survival is to receive an urgent heart surgery which costs Rs. 3.75 lakhs – an amount Shashikant simply can’t afford or borrow.

Your contribution will help save the life of this little one 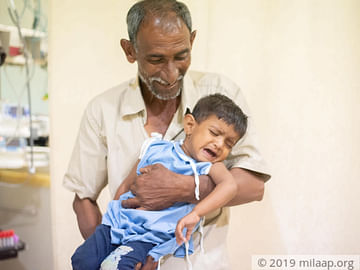 This 1-Year-Old Has Already Fought Death Once, This Time Only A Surgery Can Save Him

Atharva's poor parents are struggling very hard to afford the surgery, but they need your help