Despite Having Cancer, Teenager Is Determined To Fulfill His Dreams Of Becoming An Engineer | Milaap
loans added to your basket
Total : 0
Pay Now

Despite Having Cancer, Teenager Is Determined To Fulfill His Dreams Of Becoming An Engineer

Shares
Shares
Share on whatsapp
Ankit lies in bed, his whole body weak and swollen all over. Gruelling sessions of chemotherapy have not been kind on him; he has painful mouth ulcers that do not allow him to eat food properly. Life is difficult, but instead of complaining and losing faith, Ankit is brimming with confidence. He patiently waits for the doctor to come, telling him the same thing every other day: ‘I am going to be alright, no doctor? I want to get out of here as soon as possible’.


“He knows everything about his disease, from A to Z. In fact, he is the one who asks about the medicines and the future course of treatment. Like he knows about his treatment, he also knows that we have exhausted all our money. He knows that we cannot afford the bone marrow transplant that he needs to survive, but he remains positive. I wish I was as optimistic – instead I fear that I lose my son because of lack of money,”-Amit, father.

Ankit was first diagnosed with blood cancer in 2017, when he had just finished writing his class 9 exams. Repeated fevers and low platelet count first hinted at dengue, but unfortunately, it was something far worse. Ankit’s parents Amit and Mitali tried hiding the fact that he had cancer from him, but he Googled the medical reports and found out by himself. From day 1, he was strong and told his parents not to worry. His optimism led him to beat the disease after just 6 months of chemotherapy and he even went back to school. But recently, he relapsed. Even now this young boy tries to remain positive.


“He is only worried about his studies and future career. He wants to become an engineer and even scored 84% in the 10th boards. Now he thinks he will lag behind his peers as he in hospital while they have all been promoted to 11th. He tells us, ‘They are one step closer to achieving their dreams, but I am stuck here.’ But when he sees worry on our faces, he tries to cheer us up and tells us that he will beat this disease for sure,”-Mitali, mother.

These parents have nothing left to continue their son’s treatment, need help

Amit works as an insurance agent in Kolkata, earning a modest salary that was enough to take care of his wife and child, along with household needs. Knowing that his son had a penchant for studies, he had been saving up for his higher education. But fate had other plans and Amit ended up spending all his savings on Ankit’s treatment. After he relapsed, Amit had to sell off his wife’s jewellery to admit him in the hospital. Now, the family is left with nothing for the bone marrow transplant that is Ankit’s only shot at life now.

“My son is very critical. He has big dreams and wishes to live a long, fulfilling life. But I don’t have the means to save him, please help me,”-Amit.

With your kind contribution, these parents can save their son and make his wishes come true 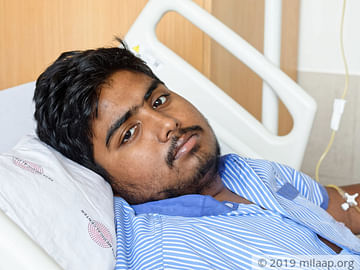 Cancer May Make His Body Weak, But His Mind Is Strong As Ever

This teenager is confident and optimistic that he will beat cancer. Please support him.