Critically-Ill 7-Year-Old Is So Weak That He Does Not Even Have The Strength To Cry, Needs Urgent Liver Transplant | Milaap
loans added to your basket
Total : 0
Pay Now

Critically-Ill 7-Year-Old Is So Weak That He Does Not Even Have The Strength To Cry, Needs Urgent Liver Transplant

“My son is in the ICU – critical and fighting for his life. He is starving as he cannot eat anything due to his painful swollen tummy. He has become so weak that he does not even have the strength to cry. I worry that I will lose him, but I don’t have the means to save him,”-Mohammed Raehan, father

Ali is a smart 1st grader who always prioritized his studies over playing football, though he liked both equally. He would always talk about the day’s lessons at length after coming back from school, and expected his parents to listen keenly. Seeing his zest for studying, his parents Raehan and Sabeena put him in a private school in Lucknow, even though they couldn’t afford it. They wanted to do everything in their capacity to make sure that their son had a better life. But when their active son had stopped eating properly 6 months back, they did not think much of it an dismissed it as a phase that would pass soon. But 10 days back, they found blood in his urine and his stomach started swelling up.

“We took him to many doctors in Lucknow who said it is a liver problem that can’t be treated. That’s when we came to Delhi as a last resort. Now looking back, we understand that we missed so many signs – the recurrent fevers, the lack of appetite. We are uneducated, poor people. What to do?”-Raehan, with tears in his eyes.

‘I got second rank…I want to go back to school’

Two days back, while he was getting treated in the ICU, Ali’s teacher called him up to congratulate him. She said that he came second in the class and told him to get better soon so that he can come back and so better in the exams next time. Ali has been restless since then.

“He speaks very faintly now and cannot even get up from bed, but he tells us that he wants to go back to school. Talking about his teachers and classmates lights up his face – little does he know that without a transplant he will never be able to see them again,”-Sabeena, mother

Ali's father, mother and grandmother at the hospital

Raehan owned a car-washing shop in Lucknow that was his family’s only source of livelihood. He used to earn Rs 9,000 monthly from it. But in order to take his son to Delhi for treatment, he had to sell the shop for a very less amount. He was able to pay for treatment till now, but he does not have enough money for even donor work-up tests now.

“I am determined to save my son. He is our only child. Everybody we know has helped us in small ways, but we will never be able to afford such a big amount. Please help us,”-Raehan

7-year-old's liver is 100% damaged, he needs urgent transplant,  time is running out and his family is begging for help to save him. Your contribution can save his life 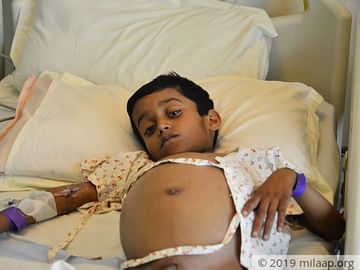 This little boy's swollen tummy is hurting him, he cannot eat or sleep

His damaged liver will kill him without an urgent liver transplant