Teenager's Leg Will Be Amputated Due To Rapidly Spreading Cancer, She Needs Urgent Help | Milaap
loans added to your basket
Total : 0
Pay Now

Teenager's Leg Will Be Amputated Due To Rapidly Spreading Cancer, She Needs Urgent Help

Shares
Shares
Share on whatsapp
Shankarappa is a garbage collector in a village near Hubli. After his wife’s untimely death, he has tried to do his best for Akshata and her younger brothers. When Akshata was diagnosed with a cancerous tumour in her leg, he did everything he could to start her treatment – but now he’s struggling. Akshata's cancer is spreading so rapidly, that now they will have to amputate her leg.

“They told us that her cancer is very aggressive. She will lose her leg now. If I can't afford her treatment in time, she will lose her life to this dangerous disease.” – Shankarappa, father

Akshata's mother drowned in a lake, leaving the family devastated

“I was just 9 when my mother slipped and drowned in the lake while trying to fill water. Ever since then, I’ve been taking care of my two younger brothers while my father went for work. It took me a while to understand that my mother was never coming back, and I realized that I had to study well and get a good job for my family. I was preparing to give my class 10 board exams this year when one month ago, I was diagnosed with cancer.” – Akshata

Akshata dreams of becoming a doctor one day. Her mother would proudly tell their neighbours that her daughter would one day take care of all of them. After her death, Akshata was even more determined. When she started class 10 last year, she wanted to ace her exams to get into a good science college. However, she started having severe pain in her leg. When the swelling did not reduce, Shankarappa took Akshata to Bangalore. They were told that she has a tumour in her right leg and had to start chemotherapy immediately.

Shankarappa works as a garbage collector for the village panchayat, he can’t afford the 14 lakh treatment

Shankarappa has tried his best to do well by his children. He works as a garbage collector for their village panchayat and earns Rs. 5,000. He had to borrow Rs. 50,000 from relatives to start Akshata’s treatment. He has no means to continue it. He now shuttles between the village and Bangalore – to work, take care of Akshata and his sons. Akshata worries about his health.


Akshata and her aunt in the hospital

“My aunt stays with me in Bangalore in a room near the hospital and appa comes sees me over the weekend. He can’t stop working, he also has to take care of  my brothers now that I’m not there. I never thought I would have the chance of getting treated in such a big hospital, but my father did everything he could to bring me here."

Akshata needs chemotherapy followed by surgery to remove the tumour in her leg. She can barely walk without support now. Only you can help her fight cancer.

Akshata is a brave young girl, who after her mother’s death, took on the responsibility of her two younger siblings. She’s her father’s biggest support. Shankarappa is devastated that he can’t save Akshata from cancer and please for your help. 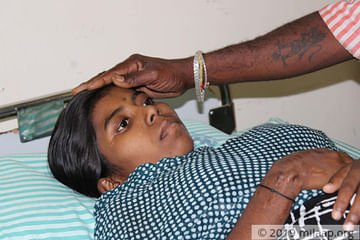 Akshata needs chemotherapy to beat cancer and go back home to her brothers.

UPI: givetoshankarappa1@yesbankltd (Copy to clipboard)
Or
Click here to read the instructions before you make a bank transfer.