Adithya's Father Has Been Struggling To Save His Life On An Income Of Rs. 4000/month | Milaap
loans added to your basket
Total : 0
Pay Now

Adithya's Father Has Been Struggling To Save His Life On An Income Of Rs. 4000/month

Shares
Shares
Share on whatsapp
At 17 years of age, Adithya has been in constant pain, fighting to stay alive and make it to the rest of his life. With an income of just Rs. 4000/month Vivekananda Kamath moved mountains to fund Rs. 34 lakhs for a liver transplant that saved his son's life. The story did not end there. Adithya is not out of danger yet as he wound up with a complication after surgery. He still needs treatment and his father is struggling for every rupee to mobilize funds.

Adithya is the only son of Vivekananda and Smitha. They come from a modest household near Udupi, where Vivekananda works at an educational institution. He makes close to Rs. 48000/year, less than what even a daily wage farmer makes toiling on his land.

"It began with nausea and vomiting. At first, we thought it was food poisoning. When it got worse, we went to a local doctor who treated him with medicines. It didn't help so we again went to a hospital where he was diagnosed with jaundice. His bilirubin and hemoglobin levels were dangerously abnormal. We were referred to Manipal, and the doctor gave us the prognosis - liver transplant."

It was physical, mental and emotional hell trying to save Adithya from the grasp of death

Running a household on Rs. 4000/month is never easy, especially while you have a child studying in 1st PUC. Vivekananda was preparing for Adithya's future when his existence came into question. The boy took a break from school while battling the disease. The family pleaded everyone they knew for funds. They are now deep in debt, mortgaged everything they ever owned, and pooled in Rs. 34 lakhs for a liver transplant. It was traumatizing every minute.

"If we didn't get the money, then we were responsible for our son's fate."

Just when they thought the worst was over, fate played its hand trapping them again

Aditya was recovering when he was found to have a biliary stricture. He was admitted to the hospital once more and had double stenting procedure. Now he needs regular follow-ups, medicines, stenting of bile duct every three months, and frequent lab tests for the entire year.

"Again we have an estimate of Rs. 12 lakhs. For someone who already owes Rs. 34 lakhs, there is not a single person who would lend more. I am desperately seeking help. My son needs you now more than ever."

Give Vivekananda a hand in saving his son's life and a chance for Adithya to recover from this terrible situation. 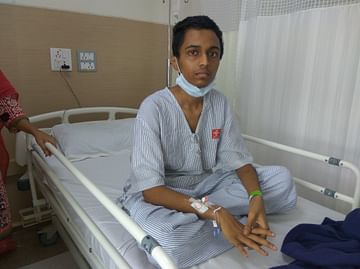 Adithya survive liver failure with a transplant only to find out that he had a biliary stricture.