He Spent 12 Lakhs And Sold His Only Piece Of Land, Still He Can't Afford His Son's Transplant | Milaap
loans added to your basket
Total : 0
Pay Now

He Spent 12 Lakhs And Sold His Only Piece Of Land, Still He Can't Afford His Son's Transplant

“He needs an injection every month that costs Rs 15,000 but all I make in a month is Rs 8000. The medicines are not enough for him now, he needs an urgent bone marrow transplant for Rs. 25 lakhs. Our struggle started last year, and I feel it will all be in vain if we cannot save Adhi.” - Gunajit, father.

Even if there is a small cut, his bleeding doesn’t stop

2-year-old Adhiraj is the only child of Gunajit and Babita. But in a cruel turn of fate, the little baby has Wiskott Aldrich Syndrome. It is a genetic disease where the body’s immunity is heavily compensated and the simple infections can turn out to be fatal.

“His platelet count is very low. Even if there is a small cut, his bleeding doesn’t stop. Sometimes, he bleeds from his gums and even while passing urine. We have to be very careful with him. A sneeze, a cough and we are scared that we have to rush him to the hospital again,” - Babita, mother.

‘Despite spending so much, we are nowhere near saving our son from the disease’

Gunajit doesn’t have a permanent job - he works as a peon in the electricity board office in Tezpur, Assam. He makes just about enough to run his household, his ailing parents are also dependent on him. He had a piece of land where he grew vegetables and paddy for the family - he had to sell that as well at a very low cost.

“I got just a lakh for my land. It is very less but what choice did I have. Since June, I have spent about 12 lakhs. But the doctors now told me that neither Babita nor I can donate bone marrow to Adhiraj. They need a 100% matched donor and we were only 50% matched. I feel so helpless. Money is flowing out of  my hands like anything, yet my son is nowhere near getting the transplant,” - Gunajit.

Despite his weakness, little Adhiraj has not stopped being playful.  He doesn’t like a life full of restrictions and cries when Babita asks her not to go out. He hates the black spots all over his body. He wants to spend his days enjoying like any other kid his age but his disease won’t let him do that. Adhiraj’s only hope is a bone marrow transplant but his father can’t afford that. With your help, Gunajit and Babita can save their only child - a small contribution will go a long way to change their lives for the better.

The parents have done everything they could and still, they can't afford the life-saving transplant for Adhiraj. They are counting on your help 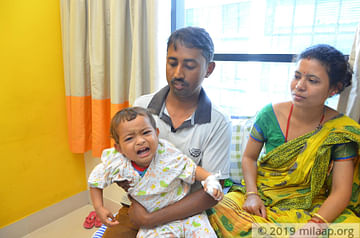 His Bleeding Doesn't Stop Even If He Gets A Small Cut

Adhiraj's genetic disease has made him very prone to infections, he needs a transplant