This 1-year-old almost lost her leg due to pneumonia, is still fighting to stay alive | Milaap
loans added to your basket
Total : 0
Pay Now

AB
You are sending a message to
Anil Bhadawalakar
Go back

This 1-year-old almost lost her leg due to pneumonia, is still fighting to stay alive

"I remember, it was the day after Navratri started. I and my wife were in the ambulance with our daughter, going around hospitals, begging doctors to save her life. I remember how my daughter was crying for water, but we weren't allowed to give her some. Despite being her parents, we couldn't do anything but cry at the sight of our baby's listless body. Our little angel was fighting for her life that day, and we couldn't even give her water."

Aaradhya is 1-year-old and is the apple of her parent's eye. So naturally, when Anil and Anushka's baby developed fever, they left everything and took her to a better doctor in south Mumbai.  What happened next was something they had never even imagined.

Upon performing rigorous check-ups, the doctor said that they had to immediately rush their baby to any nearby hospital if they wanted to save her. The first hospital they took her to rejected admission as they didn't have any available beds in the ICU. They then were taken to 12 other hospitals from there, all declining admission due to one reason or another. Hopeless and dejected, they somehow managed to reach Hinduja Hospital by 12 am where Aaradhya was immediately rushed into the ICU and put on medications.

"We reached the hospital at midnight, and she was being continuously treated for next 5 hours. When the doctor came out of the ICU, he told us that our baby was critical and had to be put on a ventilator. He said that he has done everything he could, and now we can only wait and pray for her life. She was on the ventilator for next five. I think all we did in those days was to sit outside the ICU and cry", said the father.

One tragedy beckons another

When one thing goes wrong, everything else starts to crumble or at least so happened in the case of Aaradhya. Due to certain unforeseeable reason, her right leg stopped receiving blood circulation. Because of this, everything below her knee began turning red. The baby who has recently started breathing on her own and opening her eyes had to go through another life-threatening procedure. The doctor took her to surgery, and parents were in dark about the possibility of whether the child could walk ever again.

"I was so scared for my baby. A few days back she was jumping around the house, throwing tantrums and creating havoc, and now she might end of losing her leg. Never in our worst nightmare did we think such a day would come to pass", said the mother.

Thankfully, the baby was able to avoid amputation and started showing overall improvement. After a total of 20 days in ICU, Aaardhya was finally shifted to the general ward. But the trouble is not over yet. Her leg is still healing and isn't completely out of danger. She hasn't started talking again and is still not able to identify her parents. For her to be able to walk again, it is imminent that she stays for up to 10 days under the hospital's round-the-clock supervision and care.

A family of humble means

Aaradhya's father works in a private company for a meagre salary of Rs 10,000, Her mother is a house-wife. They live in a rented apartment in Virar, and the rent alone costs them Rs 4000 per month. The estimated cost of entire treatment is Rs 5 lakhs and the family has been able to arrange for only Rs 50,000 as of yet. The mounting amount is something that continues to bother Aaradhya's parents.

"We are trying everywhere but no one is ready to give us any money. I don't know how will we manage to bring our baby home", said the father worriedly.

Aaradhya has fought a fight and lived to tell the tale. We owe it to the little to aid her recovery after that show of immense courage and unwavering will to live. Funds raised through this fundraiser will go towards her treatment. 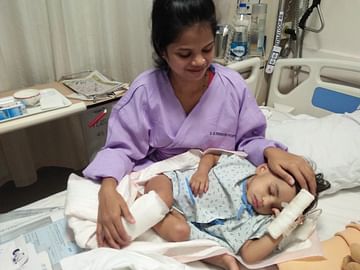 Aaradhya is in the ICU fighting severe Pneumonia. She now needs your help to survive.