6-Year-Old Shinu Might Not Live Until Her Next Birthday Because A Hole In Her Heart Is Slowly Killing Her | Milaap
loans added to your basket
Total : 0
Pay Now

A
You are sending a message to
A
Go back

“Shinu hadn’t seen such a big hospital before. She thought it was a mall and told me how nice and posh it looked. My poor child doesn’t know that she was being admitted there because of her bad heart,” says Sajitha, Shinu’s mother.

Shinu Vinod is going to be 6 years old this month. But she has a heart defect that may not let her live till her next birthday. An urgent surgery is her only shot at survival.

Shinu's parents blamed their family's abject poverty for her weakness

Little Shinu always looked younger than her peers; she was underweight and regularly suffered from breathlessness. Her parents thought that their poverty was to be blamed for Shinu’s problems. “We could not afford to buy expensive fruits and vegetables, because I am a rubber tapper and work is hard to come by. Some days, I make enough money to feed my family of six – Shinu, her elder brother Sanu, my wife, my mother and brother some rice congee while on other days we have to make do with old food. I believed that our inability to provide nutritious food was the reason Shinu looked so weak,” says Vinod, Shinu’s father.

Shinu would miss school regularly due to recurrent fevers

When Shinu would be down with fevers regularly, Sajitha’s maternal instinct always told her that there was something really wrong with her daughter. But she could never explain it to anybody. “This began happening more often last year. My child would suddenly get hit with severe bouts of fever. She would have been perfectly okay the previous day – playing and just being herself. Her sudden weakness made it very difficult for her to participate in normal activities and she would miss school for weeks altogether,” adds Sajitha.

Without an open heart surgery, a lifetime of pain and suffering is in store for this little girl

An echo test and subsequent investigations confirmed the worst: Shinu had a congenital heart condition which makes it difficult for the heart to pump enough oxygenated blood to the rest of the body. This was the reason for all her issues.

“We have been told that Shinu’s heart has a genetic defect that needs to be repaired within a year or she will suffer its negative consequences for the rest of her life. She can get severe respiratory infections from time to time, and medicines may not help. We did not know that our little girl had been living with a bad heart all this time. We have to do this surgery immediately, but I have no money. I am ready to give everything I have, but I am not sure that it will be enough,” says Vinod.

Shinu thinks she has a boil that needs to be removed

“When visiting the hospital became a regular affair recently, Shinu asked me what was wrong with her. She seemed really scared. I told her and her eight-year-old brother that she had a small boil that the doctor uncle has to remove. Both of them seemed satisfied by that answer, but I don’t know how much longer I can keep up with the act. I hope the surgery gets done before I have to answer more of her questions. It is very painful for me. I cry without anybody watching. We had no money to start with and now our child is unwell. I don’t know what we will do. Everybody in our family is clueless at the moment,” adds Sajitha, Shinu’s mother.

The total cost of Shinu’s open heart surgery will amount to Rs 1.95 lakh. Shinu hardly makes any money doing rubber tapping as it is seasonal in nature.

“For poor people like us, having enough money to eat two square meals a day itself is a struggle. How will I make almost 2 lakhs right in time for Shinu’s operation? I have already mortgaged my house – the only property I have – and that is still not enough. I want to save my daughter at any cost,” says Vinod.

Your small contribution can save Shinu’s life 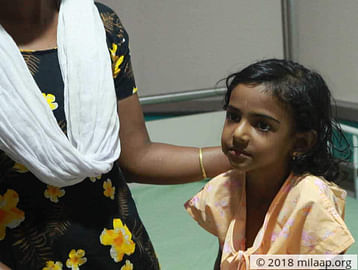