This 2-year-old has been suffering since he was 5 months old. A liver transplant will bring him out of this misery | Milaap
loans added to your basket
Total : 0
Pay Now

This 2-year-old has been suffering since he was 5 months old. A liver transplant will bring him out of this misery

Shares
Shares
Share on whatsapp
When 2-year-old Harish starts to cry in  pain, his 8-year-old sister runs to his side. "He is going to bleed from his nose, right mother?". She sees her little brother every day in pain and there is nothing she can do except give him a tight hug to stop his crying.

Harish is suffering from Hemato-blastoma, liver cancer. He has been under treatment since he was 5 months old. His father, Suresh, is the only earning member in the family. His mother, Sumithra, is a homemaker.
His father has been struggling for funds since Harish was 5 months old
"Harish was only 5-months-old when he started experincing several symptoms. At first the family did not know he is suffering from a critical condition. "We thought it's just fever and he will be fine. But after several medical investigations we knew it is a serious liver condition," says his father

Harish's father Suresh is a painter and he gets 450-700 a day. When Harish gets admitted to the hospital for treatment, Suresh cannot attend work and is out of money for the day.

His mother has come forward to donate her liver

Harish's mother has come forward to donate a portion of her liver for Harish. The family is just a step away from getting Harish treated except for the funds.

The only hope the family has is the support from generous individuals.
Harish's 8-year-old sister,Shruthi, takes care of her brother while her parents look for support. Harish is very close to his sister. She cries when she sees her little brother getting an injection. "Shruthi runs and hugs her brother when he is crying in pain. She says that her hug comforts her brother", says Harish's mother.

This family needs our urgent help to save Harish.

A generous donor has committed to a significant amount and is also matching all donations made on Milaap. 100% of your donations will go towards the treatment and surgery.

Harish's parents are trying their best to arrange the funds for his transplant. But they are unable to arrange for the entire amount. They have managed to raise 2.5 lakhs. With our support, the transplant will be completed without any delay.

Click here to learn how you can save Harish 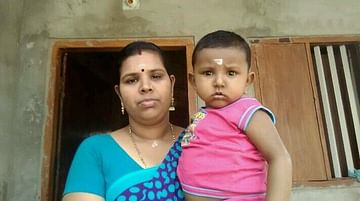 This 2-year-old has been suffering since he was 5 months old. A liver transplant will bring him...