Shares
Shares
Share on whatsapp
Gouri Kanu is a very energetic and cheerful 45 year-old woman who lives in Karimganj(Assam), near the India - Bangladesh border. She likes to keep people around her happy but what people are unable to see because of her happy face is that this poor woman is actually suffering from cancer. 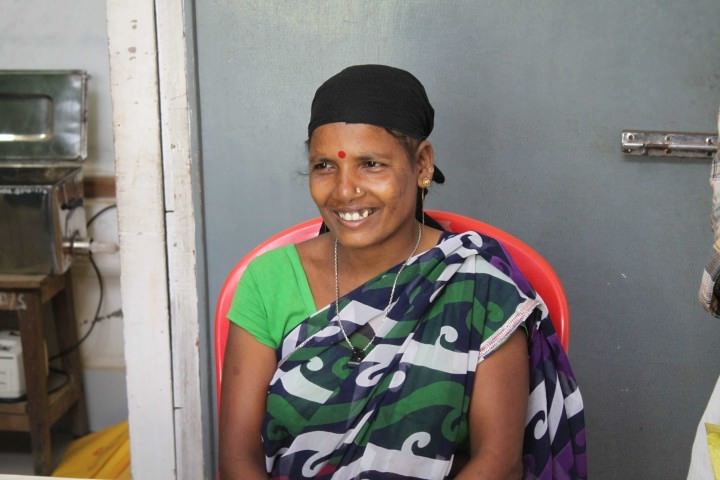 She is a mother who works hard for her daughter's future

Gouri is married and has a daughter and a son. She works as a household helper everyday and also takes care of her house. Her husband and teen aged son are labourers who do manual work to earn a living. Together the family struggles to earn only Rs. 4000/- per month. No one in her family has been able to study as they are not in a position to afford education. They still saved what ever little they could and sent their 18 year old daughter to school. However, their daughter had to discontinue her studies as her school fees were becoming very expensive for the poor family. Gouri still hoped to save money and provide her daughter with a sewing machine, so that she could learn tailoring and grow up to be an independent woman.

Sadly, one day they found out that Gouri had cancer

Things for this poor family became very difficult one day when Gouri noticed that she had a small lump of skin growing bigger near her underarm. Thinking it was some kind of a skin disease she started taking homeopathic treatment. In April, 2016 when these bad symtoms did reduce, Gouri had to travel and consult an Oncologist for better treatment. After running a few medical tests, Gouri received horrible news she was suffering from Stage III breast cancer. She had tested positive for Her2/neu - a type of protein produced by cancer cells which make them grow at a very fast rate. This meant that her breast cancer was very aggressive.
It was extremely difficult and sad for her to accept the news that she was suffering from cancer. Being uneducated and coming from a very poor family, she thought that cancer meant death and that she would not survive. Her happy nature had changed. She was very sad and depressed and had almost her hope to live.

She has become motivated and wants to fight this disease

Gouri started her treatment under Dr. Poulome Tapkire who is a Surgical Oncologist at Cachar Cancer Hospital & Research Centre. Dr. Poulome strongly believes that Gouri’s disease is potentially curable. She along with Gouri's husband and the team at the hospital are being very supportive and this has helped Gouri come out of shock. With support, she is motivated to receive treatment to fight this deadly disease. This has brought hope to her family, but they cannot do anything until she is completely cured.

There is a problem, they are unable to pay for the treatment

Gouri’s doctors are confident that the Traztuzumab therapy will help her survive. However, Gouri has a problem, her family is extremely poor and cannot afford this treatment which costs about 10 lakh rupees. Her treatment also requires chemotherapy cycles, radiation therapy and surgery which bring the cost up by another lakh. Gouri also has to struggle and travel for 6 hours to reach the hospital from her house. Not only is this tiring, it also involves a lot of money spent on travelling just to receive the treatment.

How you can help Gouri?

Gouri's chemotheraphy has started and she is responding well. Her family has managed to arrange 30,000 rupees for the initial treatment by selling whatever they could and by borrowing. Gouri is strong, but her family is extremely worried as they cannot afford her treatment. You can help by contributing towards her treatment. Your support will give Gouri the confidence to fight cancer and will also give her a chance to see her daughter grow up to be an independent woman.
Click here to support Gouri.
Donate

Help This Poor Mother In Her Struggle To Fight Breast Cancer

Gouri Kanu is a mother who is suffering from breast cancer. Your support will give her a chance...