Shares
Shares
Share on whatsapp
11-year-old Gopinath has been fighting severe heart disease ever since his birth. Now his condition has turned very critical and he needs an immediate surgery to avoid further complications and live a normal life.

He was diagnosed with a heart disease when he was born

Gopinath is the youngest son of his parents Sudha and Ramasamy. He has an older brother Neethiswaran (13). His parents were thrilled when Gopinath was born as their family now felt complete but their happiness soon turned into a nightmare. Gopinath was diagnosed with a hole in the heart and the doctors told them that they had to wait till he turned 10 before getting a surgery. There was a good chance that it would heal by itself and he would be fine. Sudha and Ramasamy prayed every day that Gopinath's heart would heal itself. But that did not happen and his heart condition only became worse.

Gopinath’s condition made him tired, breathless and even unable to eat. Whenever his body turned blue, it would be a visible reminder of his illness to his parents. Despite his health, Gopinath is a dedicated student. He wants to be a doctor to help people suffering illnesses like him.


“He tries his best to go to school and study; he has never complained and he doesn't give up. He can't take part in sports or play with his friends and I have to take him to school on my cycle every day. Teachers often send him back seeing him suffering. It is no life for such a happy, young child,” says Sudha.

Mother is having sleepless nights thinking of his deteriorating condition

Sudha stays at home to take care of Gopinath. She does not want her son to feel sad, and tried to make sure that Gopinath is hopeful and trusts that his parents will save him at any cost. But she has sleepless nights thinking about her son’s future. When she learnt that his condition was deteriorating, she took him to a hospital in Trichy immediately. They were asked to go to a hospital in Chennai for surgery.

Ramasamy is totally devastated to know about his son’s condition. Even to travel to Chennai he has to borrow money from his friends. Without even a penny in his hands to spend on treatment these parents took their son to the hospital in Chennai.

“I was wondering what I would tell Gopinath and soothe him if he got worried. To my shock, he was the one who consoled me. He understands that I’m struggling. How can I ever give up on such a precious child? I'm sure he will touch the lives of many people when he grows up. I have to save him at any cost” says Ramasamy.

This surgery will help Gopinath have a normal childhood, free from pain and worry. He deserves a normal childhood and a chance to achieve his dream of becoming a doctor. Ramasamy earns only Rs 200 per day, an amount with which he can hardly make ends meet. He requires 4 lakhs for the surgery. Only your contributions can save Gopinath. 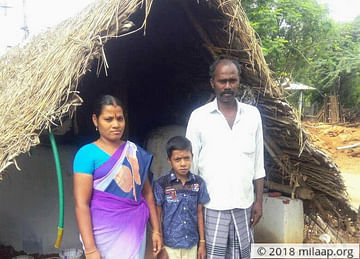 Gopinath needs an urgent heart surgery and his parents need help getting him life-saving treatment.