This Father Of Two Needs Your Help For A Life Saving Heart Surgery | Milaap
loans added to your basket
Total : 0
Pay Now

You are sending a message to
Ashok Diwate
Go back

Shares
Shares
Share on whatsapp
36 year old Swapnil has a gentle smile on his face. He is a loving husband to Poonam and a doting father. Poonam has been married to Swapnil for the past 17 years. The couple has two children- 15 year old Samiksha, and 7 year old Ishita. It is a small, but happy family.  Looking from the outside, it is hard to believe that Swapnil has been battling with a major heart problem for over two years.

On the morning of 29th January 2017, Swapnil had come home after dropping his daughters off at school. He was sitting in the chair drinking his morning cup of chai when he felt the pain in his chest and collapsed. Even though he didn’t have the typical symptoms of a heart attack, he knew that something was seriously wrong.
The family rushed him to a hospital near Pune where a friend of Swapnil's worked. They took and ECG and doctors told the family that Swapnil had suffered a massive heart attack. Doctors performed an emergency angioplasty. At the time Swapnil was only 34 years old.
For the past two years, Swapnil has undergone regular tests and taken medications. Every day, he takes a minimum of 6-7 tablets.

“I used to notice that sometimes his heartbeat was very slow. I was always scared.”

Swapnil's daughters are worried for their father:

“I keep telling them that Papa will be fine, that once he gets better again, he can play with them again”

The pillar of his family:

Swapnil is the sole breadwinner in his family. He used to run a small business where he sold RO or water purifying units. After his heart attack, Swapnil has not been able to concentrate on his business. Now he simply runs the maintenance of units already sold. The family’s income has gone down drastically.
Swapnil's father- Ashok, is a retired teacher. He uses his monthly pension of about Rs 10,500 to help with the children’s education fees and the medicines needed for Swapnil. The family is struggling to get by as they have no other sources of income.

Swapnil is the glue that holds his family together. This young father urgently needs your help to undergo a life-saving heart transplant operation. With this operation, Swapnil has his life before him.
Help save Swapnil!
Donate 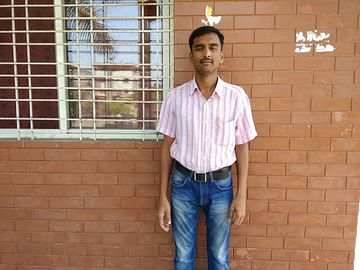 Swapneel Needs Your Help To Undergo A Heart Transplant