This 11-year-old Is Now Running Out Of Time To Have A Liver Transplant That His Parents Cannot Afford | Milaap
loans added to your basket
Total : 0
Pay Now

"When people see my son, they talk about how chubby and cute he is. Gaurang's chubby personality is not normal. He has a liver disease and it is killing him. Nobody sees that, and nobody knows that we are struggling to save him!"

Despite the best efforts of doctors and his parents, Gaurang's liver is completely decompensated. It is too damaged to be saved and he needs an urgent liver transplant to survive. Gaurang's father, Gautam – a school teacher in Assam, has spent everything he earned on treatment and has nothing left to save him.


Gauranga with his mother in the hospital

Gautam has needed to make some terrible, heartbreaking choices for his children

Gautam and his wife, Moni, live in a small village Tamulpur with their two children, Preeti (13) and Gaurang (11). Unfortunately for them, both their children were born with a liver disease. All their lives, every extra rupee earned went into their treatment. A few months back, something happened that made these parents very desperate.

“The doctor told my brother that his daughter's illness had affected her brain. Now, she can't eat or speak normally. It will happen to his Gaurang too if he doesn't get a liver transplant immediately. They asked him to save at least one of his children,” says Pabitro, Gautam's brother.

They cry whenever he cries

Since that day, Gautam and his wife spend all their waking hours unhappy at their inability to save their child. Every time even one of their child vomits, they go to the hospital in Guwahati. When Gaurang cries at having to eat boiled food without oil or salt – they begin crying with him.

The family has managed all these years only thanks to the help their relatives gave them when the children were really sick. They even live in a relative's house not having a place of their own. Their only focus till now has been their children's health and with news of Preeti's condition, they wonder what they could have done differently.


Gauranga's condition causes his stomach to fill up with fluid

Despite years of treatment, there has been no change in Gaurang's condition

“They are also very tired. I have seen how they have lived all these years. They have not bought themselves anything – all the money is spent on medicines. They live on our relative's charity. My brother is unrecognisable in the man who cries every day seeing his children get sick and unable to eat anything,” Pobitro says.

Despite being on a strict diet, Gaurang still falls sick often. His stomach fills up painfully with water and he vomits anything he eats. The excess bile in his blood causes him severe itching and his body is full of small, thing scabs. His illness is wasting him away.


Gaurang is waiting to get better and go back to school

Even then, it is not too late for Gaurang, he has another month. In that time, his body is still strong enough to take and heal after a transplant. His father Gautam and his uncle Pobitro are willing to donate their own liver to save the children. It is now a matter of time – and how soon funds can be arranged for the procedure.

Gaurang needs Rs 15 lakhs to get a liver transplant that will save his life and end his suffering. After all that they have been through, his parents really need hope.

Your donations will help these parents save their child from a painful end. 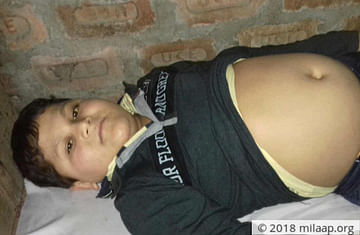 Gauranga is very sick and he needs a new liver immediately.

Gauranga has been suffering from liver disease since birth and he is running out of time.