Auto Driver And School Aaya From Andhra Fight To Save Their 4-year-old Son From Liver Cancer | Milaap
loans added to your basket
Total : 0
Pay Now

"I wanted my child to have a better life than us so I started working as an Aaya in a convent school and enrolled him there as a student. I was overjoyed to see my son study in a classroom, he loved coming back to school everyday. My happiness was short lived. In just 20 days, he was diagnosed with liver cancer and now he is fighting for life. Everything happened so quickly that we did not even have time to think. I cannot bear the thought of losing my son.” - Veera’s mother, Nagamani.

What started as a fever turned into a life-threatening disease

A month ago, unlike everyday Veera was not actively playing in the evening but instead, he slept on the bed with high fever. The mother just hoped that he would soon be all right. That night he cried inconsolably with stomach pain. Nagamani and her husband, Raju rushed him to the hospital in the morning. The doctors found a tumour near the liver and suspected to be cancerous. They did not waste any time to rush to a hospital in the city, where the doctors have confirmed that their son was in the face of death.


“I immediately sent my husband to sell the only gold we ever had in our lives - My finger ring and his chain which was given us during our marriage. With that money we admitted our son and started the treatment,” - Nagamani.

Vera is suffering from hepatoblastoma, a malignant form of liver cancer. The disease has completely damaged his liver and the tumour in this 4-year-old’s body are so huge that if they try to remove, it might just take his life. Chemotherapy is the only treatment that is capable of reducing the size of a cancerous tumour. Veera needs 7 cycles of chemotherapy and each cycle should be given after every 15 days. Even a slight delay will increase the size of the tumour. Though the poor parents have struggled to start the treatment they are unable to continue it.

“His stomach is slightly swollen and I'm worried that it will increase. He often holds his tummy and cries out in pain. His fever doesn’t let him eat properly and when he has something he immediately vomits. He has become too weak to talk but when he regains little strength, he always wishes to talk to his elder sister on the phone I know he misses her though they used to always fight with each other. I just want my son to be healthy and fine soon,” - Nagamani.

Raju is an auto driver in Bantumilli village, AP. He barely earns Rs 200 a day. For a better income, he purchased a new auto four months ago on loan. To support the family and for son’s education, Nagamani started working as an Aaya in a school for 4,500 a month. Due to the twisted faith, both have not gone back to work for a month now. She might lose her job and he may lose his auto because he is unable to pay the dues.

“On one hand I want go back to the village and work hard to save my son and also pay the loan and on the other hand I cannot leave my son and wife alone in this battle. We were told that only if the tumour size decreases my son can undergo a surgery and luckily he is responding to the treatment. At any cost I want to continue the treatment but my shoulders are unable to bare the expenses. We need 8 lakhs to save him, please help me save my son,” - Raju.

Veera is only 4 years old and he is fighting death every second. With your kind contribution he can beat cancer.

Check here to save Veera. 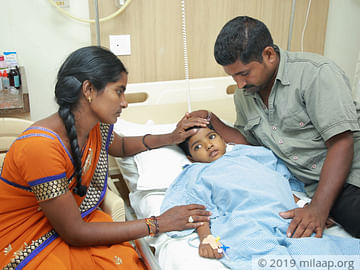 The tumor will grow if they cannot continue the treatment.

UPI: givetolellaveerababu1@yesbankltd (Copy to clipboard)
Or
Click here to read the instructions before you make a bank transfer.