Now Farmers Won’t Have to Depend on the Rain Gods, Thanks to SayTrees! | Milaap

You are sending a message to
Kapil Sharma
Go back

Now Farmers Won’t Have to Depend on the Rain Gods, Thanks to SayTrees!

Shares
Shares
Share on whatsapp
Concerned about Bengaluru’s shrinking green cover, Kapil Sharma, a software engineer decided to do something about it. What started as a small initiative eventually grew into a full-fledged operation. Kapil’s passion gave birth to the NGO, SayTrees. He is transforming the city and making it green once again.

“A recent study has shown the number of trees per person to be 422 for planet Earth. The same figure for India stands at 38. Further, the same measure for Bengaluru is 0.1 tree per person. Isn’t this stark difference something to worry about for the city of gardens?” Durgesh Agrahari, Head of Partnerships and Projects with Say Trees, asks with concern.

On a rainy Bengaluru morning, while taking a walk with Durgesh Agrahari at the promenade alongside Haralur lake, a beautiful Kingfisher flew by. This lake is one of the locations where SayTrees, carried out a drive last monsoon to plant more than 500 saplings. SayTrees is one of the reasons Bangaloreans are able to enjoy their morning walks & evening strolls amidst nature.

SayTrees is a volunteer driven organization committed towards increasing the much needed green cover and forest expanse in India. In 2007, 33-year-old Kapil started out with several campaigns for plantation of saplings in Bengaluru. Several projects such as ones related to road widening and metro construction had affected the green glory of the city. Kapil made a decision to save and retain the city's green cover. His friends and other environment enthusiasts soon joined him and this grew into a much larger movement.

The organization has slowly expanded their outreach towards the farms in rural India. A series of  droughts has caused a heavy impact on farmers’ income and the agri-economy at large. SayTrees was looking at solutions which would be sustainable in the long run and be beneficial to farmers in their hour of need.

For this, Kapil came up with a proper plan of action. To ensure that corporates were also partaking in it, he took it upon himself to lay the complete blueprint, get the resources and materials in order, set up the project and finally, hand the execution over to the corporate bodies, who would then turn it into a CSR activity that would engage all their employees.

In their latest campaign, they are supporting farmers at Kadiri in Anantapur district to plant fruit saplings & timber to supplement their income from regular crops such as groundnuts, pulses, and sunflowers amongst others. “As citrus trees are relatively more drought resistant, they can provide an insurance against crop failures in low monsoon periods,” Durgesh says. Timber trees interspersed among the fruit trees and crops will go a long way in ensuring income generation for the farmers over the long term.

Additionally, SayTrees is aiming to support low-income farmers by helping them install drip irrigation facilities, which is  partly subsidized by the Government. For these campaigns, SayTrees has partnered with Green Tree Foundation, who provide the agricultural expertise required for horticulture and agroforestry to farmers.

Last monsoon, SayTrees ran a pilot project with 11 farmers and planted 4,100 saplings, and it turned out to be a huge success. It intends to replicate the success with 50 farmers this year and plans to plant 10,000 saplings in Anantpur district, Andhra Pradesh. For this, SayTrees is currently running a crowdfunding campaign on Milaap. The organization will also support farmers with irrigation equipment.

Kapil dreams to create hundreds of acres of forests every year and create a community of corporates and nature lovers to care for them through SayTrees.


This is a reworked version of an article that was originally published in The Optimist Citizen.
Donate 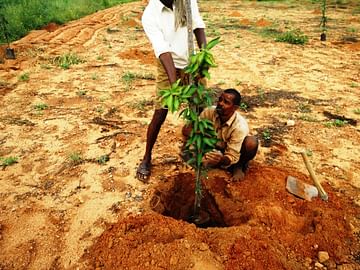 Your contribution will help 50 farmers in Anantpur, Andhra Pradesh

UPI: givetoempowerfarmers@yesbankltd (Copy to clipboard)
Click here to read the instructions before you make a bank transfer.