After 16 Brain surgeries this 15 year old is fighting to live | Milaap
loans added to your basket
Total : 0
Pay Now

D
You are sending a message to
Divyansh
Go back

Shares
Shares
Share on whatsapp
15-year-old Divyansh Rathi has been fighting death since 2015. After undergoing multiple brain surgeries and spending countless hours in physiotherapy sessions the boy doesn't seem to give up on life and wants to see himself stand on his foot again.

Divyansh suffered a serious head injury in an accident while he was returning from his school and fell into coma. After the incident the life has become hell for the family. The family has already spent nearly 50 lakhs on his treatment and is now unable to afford the medical expenses anymore. The child still needs to undergo skull surgery to save his brain from any kind of infections. Which will cost close to 18 lakhs. The family has lost everything in saving their child and your contributions will be the only way to ensure Divyansh is saved.

It all started on the fateful day of 21st September. Divyansh was coming home from a long day at school. Divyansh was a student of the 9th standard at the Poddar International School. Usually, the pickup van used to drop Divyansh at next to his house, however, on that day, the van dropped him just across the road. Diyansh was trying to cross the road and suddenly a speeding car dashed him over and tossed him in the air. Divyansh fell on the ground with his head hitting the ground and fell unconscious instantly.

"He was lucky that the car did not ran over him" recalls his father Mr. Anand.

He was urgently rushed to Yashoda hospital in Nanded. The Doctor at the hospital suggested Divyansh had a minimum chance of survival since. There was too much blood clot in his brain and also suggested the kid might become vegetative after the surgery.
Divyansh's father Mr. Anand took the risk of the surgery. Initial surgery went for 8 hours and the part of the skull was removed and the brain was heavily bandaged. However, this was just temporary fix since the blood circulation in the blood had to be taken care since a part of the skull was not covered. In next days when the blood clot was removed, the boy went another round of surgery.

The shunt surgery was also performed in the coming weeks which failed and lead to infections in the brain.

During the removal of the stitches it was found that the infections had spread to over 50% of the brain, he was then referred to Yashoda hospital Secunderabad where the doctors suggested another shunt operation this time the shunt was successful however they were unable to put the skull back this created pressure and water retention imbalance in the brain and complications with eating.

In the next 3 months, Divyansh had to suffer other complications such as memory loss, loss in eyesight and hearing defects.

To improve his condition another surgery for water retention was done and to balance the brain a screw was fixed to it, however, the screw developed an infection in the brain and had to removed by performing another surgery.

Over the course of two years, Diyansh has undergone 16 surgeries on his brain. The family has put everything at stake to get Divyansh back to normalcy.

The medical expenses as of now are over 50 lakhs rupees.

In last 2 years, Divyansh's father lost his job since he was most the traveling to Hyderabad for Diyansh's treatment.

in the last six months Divyansh has shown great improvement and is gradually getting fitter, he undergoes occupational therapy, speech therapy and physiotherapy for his rehabilitation.

Mr. Anand is unable to take up any work and take care of the son full time. Divyansh has to be feed and ideally takes 2 hours to finish a small meal since due to the removal of a part of the skull chewing is not natural anymore.

Divyansh still requires a surgery to be done to cover his brain, the current the surgery is a temporary fix and requires a covering to safeguard the brain from any infections and also improve his Jaw movement.

The family has already spent more than 50 Lakhs on his treatment and is in a very bad state with their daily expenses. The parents are now in such a financial crunch that sometimes they cannot afford the hospital's room charges and even hotels when they visit Secunderabad for the checkups. They have to make themselves stay in Gurudwara or Dharamshala so that they may at least reduce their lodging costs.

Your contribution will Surely help in saving Divyansh's life 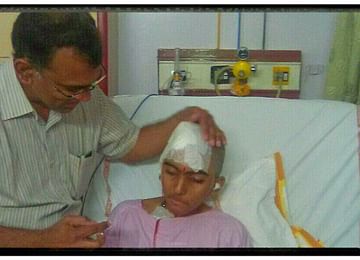 On 9th April 2015, Divyansh Anand Rathi met with a major accident and suffered a brain injury....