Baby Diksha Has A 9mm Hole In Her Heart And Only An Urgent Surgery Can Save Her Life | Milaap
loans added to your basket
Total : 0
Pay Now

You are sending a message to
Azhar
Go back

Shares
Shares
Share on whatsapp
1-year-old Diksha was born with a hole in her heart. Ever since then, she’s been going to the hospital to get regular tests and checkups. Medicines are a part of her life as much as her favourite doll. Now, Diksha’s little heart has a 9 mm hole in it. She needs surgery as early 20th February to survive. Baby Diksha only just learnt to call out to her parents, but Yogitha and Sandesh have been too worried to celebrate her important milestones. Time is ticking and each day that goes by without funds for her treatment is only bringing their little daughter closer to death.

Baby Diksha’s heart disease has made her weak. She weighs only 7 kgs and has not gained weight for months now. While she runs around playing with her older sister Samrudhi (3), Yogitha watches over, scared that even a little extra activity can make it difficult for her to breathe properly.


“She loves to play with her sister, but she can’t do it for too long. Some days are worse than others. There are days when she doesn’t eat at all. Every time we try to feed her, she cries. Sometimes, she cries through the night and we stay up trying to pacify her. She’s only a baby. She doesn’t understand what’s happening to her. But the reality of her disease stares us in the face every day.”

Diksha has been on medication since birth and it’s the only thing keeping her alive. However, she can’t go on any longer with just medication. Her doctors have advised that heart surgery is now imperative.

Diksha is running out of time without heart surgery

Yogitha and Sandesh find themselves at a dead end now. They are desperate to save their baby’s life but their financial condition is an obstacle they just can’t overcome. They have no one else to help them. The past one year has been filled with numerous tests and medications for their little one, and they somehow managed with the whatever they had but nearly 3 lakhs for her surgery is beyond their reach.


“I have seen my baby cry so much over the past year, that even when I see her smiling for a few minutes, it makes my heart feel lighter. But I know that it won’t last for long. I can’t imagine the pain Diksha is enduring. She herself is so small, and she has a 9mm hole in her heart. That’s such a scary thought. Surgery can save her and she needs to have it at the earliest, but as we’re inching closer to the date we’re only getting more worried for our baby’s life.”

Yogitha occasionally works as a tailor and Sandesh is an electrician in their village in Pune. Work is irregular for both and money is limited. Diksha’s medical bills over the past year have only made it harder for them. Baby Diksha can survive with surgery, however, Yogitha and Sandesh are running out of time to arrange for funds.

Diksha needs to have her heart surgery as early as 20th February. It is the only hope her parents have to see her alive and healthy, but they have no means to pay for it. Diksha has been living with a severe heart disease for a year now. Her pain and suffering can end with the surgery. She needs your help to be saved from the hole in her heart.

Your support can save Baby Diksha’s life. 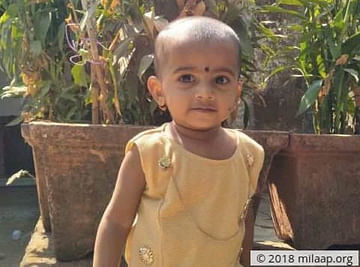 Diksha needs an urgent heart surgery to survive. You can help save her.