This 26-year-old Fitness Freak Is Now Battling Cancer And Is Fighting To Survive The Disease | Milaap
loans added to your basket
Total : 0
Pay Now

HP
You are sending a message to
Hansa Panchal
Go back

“Dhaval is very brave, his courage gives us strength. But after all, he’s our son and it is very painful for us to see him go through this”

Dhaval Panchal is an enthusiastic, creative young man, whose life came to a halt with the diagnosis of Blood Cancer. In the best years of his life, Dhaval is battling for his life in a hospital. But instead of letting his illness weigh his spirits down, he’s doing his best to put up a brave, smiling front for his family, despite leukemia taking a toll on him. Dhaval’s mother Hansa, is determined to save his life against all odds.
Dhaval has been taking grueling treatment for cancer and it leaves him really tired

Dhaval and his family never imagined his illness would be cancer

A year ago, Dhaval started developing small lumps underneath his skin. These lumps were primarily behind his ears, on the neck, near the shoulders and legs. Dhaval’s parents took him to a doctor. He was diagnosed with Acute Lymphoblastic Leukemia. Dhaval has a type of blood cancer that affects the patient’s lymph nodes. The best cure for the condition is a bone-marrow transplant.

Soon Dhaval started showing more symptoms and would get easily fatigued, and have pain in his arms and legs. He gradually started becoming weak. He took 12 rounds of radiation therapy. At first, his reports looked good. But then, very soon his blood showed cancerous cells again.

Dhaval with his parents, before the diagnosis

Just when they were feeling hopeful again, the Panchal family’s world came crashing down again. His relapse into cancer was a big blow to everyone

“Dhaval tries to be brave for us, but I’m his mother and I know what he’s going through. No one likes the idea of dying at that age.”

With the relapse, Dhaval’s and his parents’ dreams for him were shattered. He came so close to getting a second chance on life, but it was taken away from him just as quickly. To save his parents some of the misery, Dhaval puts on a brave front and reassures them that he’ll recover.


Dhaval’s elder brother, who had earlier fallen out with the family is back to help in Dhaval's treatment. But even that is not enough to cover for Dhaval’s treatment costs. He’s also the prospective bone-marrow donor. Once Dhaval gets better, his brother will be tested. The transplant has to happen immediately, owing to the high-risk associated with this cancer.

Despite all their attempts, a severe financial crunch is eating away at them

Till now, the family had spent over Rs 10 lakhs on treatment. Dhaval’s father, Dinesh, runs a small business in a shed, manufacturing wire meshes and makes only about Rs 10,000 a month. His mother, Hansa, is a housewife. Dhaval had just found an entry-level job as an animator which didn’t pay enough to even cover his expenses. After the diagnosis, he had to leave the job, making him completely financially dependent on his father.

Dhaval is currently undergoing chemotherapy following which he can have a bone-marrow transplant. In the past one month, the family has spent another Rs 2.5 lakhs for the chemotherapy sessions and hospital expenses.

“We don’t have any rich friends or relatives who can help us out in this situation. We have reached out to everyone and they have done the best they could.”

For the first round of treatment, Dhaval’s family raised fund from different trusts, relatives and friends. Hansa even mortgaged all her jewellery to meet the costs of the treatment. But now there’s no way for them to fund his treatment anymore.

Dhaval’s family is at a loss, but is determined to save him and give him a new life. Contribute to make their desperate hope a reality. 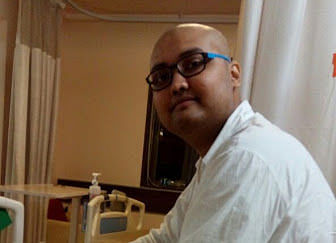 Help Dhaval Fight Cancer and Get a Bone Marrow Transplant

Dhaval's condition is worsening by the day and only an urgent bone marrow transplant can save him.