Delighted to see Suprabha multiply the impact of solar lanterns

Shares
Shares
Share on whatsapp
Suprabha Samantasinhar is a mother of three living in the Muniguda block of Rayagada district of Odisha. She purchased a solar lantern with the help of a loan from Milaap almost a year ago. She is a housewife and her husband works in a private firm in Muniguda. Her 2 elder daughters are married and live at different places in Odisha. Her son is pursuing a pre-university course in the science stream in Rayagada town. Prior to purchasing the solar lantern, she would rely on inverter light during blackouts. However, each inverter light costs around Rs.2000, just as much as the solar lantern, but dies out within 6 months of its usage. The interim maintenance or repair costs were high. The inverter lights contribute to high electricity bills as well. Suprabha, who earlier received electricity bills of around Rs.600, now pays only Rs.400 towards electricity. Also, the solar lantern is reliable; she didn’t encounter any problem since its purchase. She was overwhelmed by the utility of the solar lantern. So she later purchased one solar lantern for each of her daughters with her own savings. 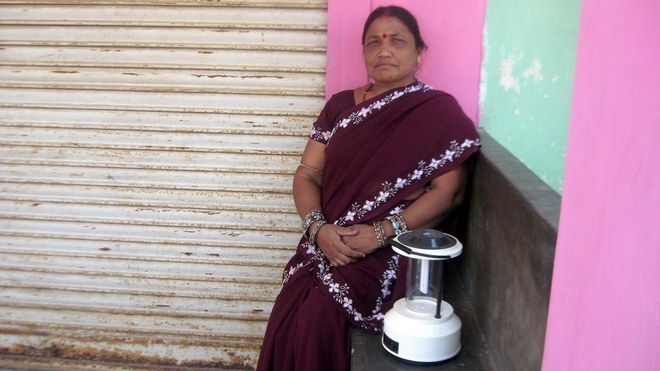 Suprabha with her solar lantern