This Young Father Needs A Kidney Transplant, To Be There For His Son | Milaap
loans added to your basket
Total : 0
Pay Now

This Young Father Needs A Kidney Transplant, To Be There For His Son

Shares
Shares
Share on whatsapp
Raju's kidneys have both failed and he needs dialysis once in two days. His wife, 1-year-old son and aged parents are dependent on him but he is too weak to work. Sometimes, he even faints after a dialysis. He needs a kidney transplant to get better before he succumbs to the condition.
Raju with his son Srihan before he became sick

Raju has worked very hard to escape the clutches of poverty

Raju's parents were farmers who worked on other's farms in their small village Vallampatla, Telangana. There was so less money that Raju and his two sisters were asked to contribute too. As the son, there was much more pressure on Raju to become the sole breadwinner.
Raju chose to continue studying and did not drop-out. Instead, he took up jobs that would support his education and help his family. He learnt welding and worked in constructions.He also took a basic course and became a part-time electrician. He got a graduate degree in Commerce and now works an accountant in Hyderabad.
Raju needs a dialysis once in two days. Since he started taking dialysis, he has become very weak
At 29, finally confident of his ability to provide for a family, Raju got married to Soujanya and soon his son Srihan was born. It seemed like Raju had got the happy ending he worked so hard for but a few months after his son's first birthday he became sick with jaundice.
With medicines his jaundice slowly healed, but unfortunately it caused irreparable kidney damage. For the last 2 months, Raju has needed dialysis every alternate day. He has stopped going to work because he is too weak to continue work.
Raju fell sick shortly after Srihan's first birthday celebration

When Srihan was born, Raju decided that his son would never feel poor

All Raju's hopes for the future were centred around Srihan. Giving his son a good childhood was important to Raju because his own childhood was so difficult. Before he became sick, Raju was applying for jobs in Canada to earn enough to send Srihan to a good school.

Everyone around him admired his fortitude and energy. "Every one he worked with has only good things to say about him. He never speaks badly about people no matter how much they hurt him. He always wants to make the best out of any situation and focus on what can be done," Soujanya explains.

But his dreams were cut-short because of kidney disease. He needs frequent dialysis and has no energy left. His health has made him incapable of working. If he doesn't get a transplant soon, his health will fade away and shatter the life he so carefully built for himself.
Raju's family is very worried for their future because Raju has not been able to work for months
In just a month, the family has spent over 2 lakhs on treatment and have no resources left. Raju's mother is willing to donate her kidney to Raju, but it will be for nothing if he doesn't get the funds to undergo surgery for the transplant.

All his life, Raju has struggled to make his life count through education and hard work. His efforts and his strength will all be in vain if he succumbs to kidney failure. Your support will help Raju save himself for his young son.

The specifics of this case have been verified by the medical team at the concerned hospital. For any clarification on the treatment or associated costs, contact the campaign organiser or the medical team.
Click here to help Raju. 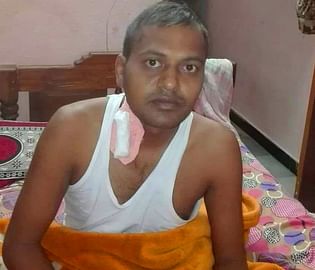 Raju can get better if he gets a liver transplant

Your contribution will save not only Raju but also his family that is completely dependent on him.