Shares
Shares
Share on whatsapp
Chinmayi is 10-years-old and suffers from a blood disorder that makes her unable to lead a normal life. She needs blood transfusions every 20 days and the frequency of transfusions will only increase if she doesn't get a permanent cure The transfusions are also damaging her organs because they leave excess iron in her body.
Chinmayi has suffered from the condition since she was 6-months-old, because of which she has always been underweight and weak

Chinmayi's father Channaswami runs a small medical shop in Malebennur, a village in Karnataka and earns Rs 40,000 per year. He spends more than twice his monthly income on Chinmayi's medical expenses. A bone-marrow transplant (BMT) is his only hope of finally curing Chinmayi.

Chinmayi is her parent's first child. When she was just 9-months-old, she was very sick that she stopped moving. “She was suddenly too tired to feed, or even turn over. We took her to the hospital and found that her blood level had dropped and she needed blood,” Channaswami explains.

Chinmayi with her mother and sister at the hospital. Her sister is 100% match and can be Chinmayi's stem-cell donor
Chinmayi was then diagnosed with Thalassemia Major – a severe form of the condition where her body completely lacks the ability to produce normal red-blood cells. To live, Chinmayi needs painful blood transfusions once in every 20 days or she has no energy left for anything. A BMT is the only cure for her condition.

The diagnosis hit Channaswami and his wife hard. “Our daughter was just a baby. We knew nothing about an illness like this. We didn't know how we would face tomorrow. But it has been 10 years, and with my friends' and family's help, Chinmayi has grown into a quiet, good child.” he says.

Despite earning only Rs 40,000 per year, Channaswami has taken loans and spent over Rs 10 lakhs on Chinmayi's treatment. In time, they had two more daughters and they are both healthy. His youngest daughter – Shukla is, in fact, 100% match to donate stem cells for Chinmayi's BMT. Chinmayi now has a chance again – if her parents can arrange for a transplant.

Chinmayi now understands why she doesn't have friends

Chinmayi has never been able to play outside with the other children. Because of her condition, she often had to miss school for the transfusions and hospital visits. Slowly, her friends realised that Chinmayi cannot play with them because of her illness and now she is never part of the group.
The family has put all its hopes on the bone-marrow transplant

“Chinmayi used to ask me why her friends don't call her any more. Now, she feels that they want to play and don't call her because she cannot. She prefers to play carrom or chess indoors. The disease has made my little girl grow up very fast,” Channaswami says.

Channaswami is in no condition to pay for his daughter's BMT. He is already deeply in debt and as much as he wants Chinmayi to get better, he doesn't have any resources to help his daughter. Your contribution will help Chinmayi get out of a life of suffering and weakness.

The specifics of this case have been verified by the medical team at the concerned hospital. For any clarification on the treatment or associated costs, contact the campaign organizer or the medical team.
Click here to contribute and give this little girl a normal life.
Donate 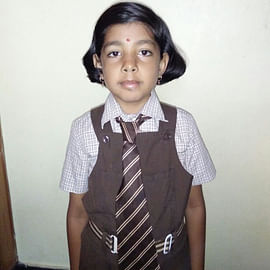 Chinmayi wants to recover from this terrible illness

Chinmayi has battled this condition since she was 6-months-old. Chinmayi is battling a terrible...