Shares
Shares
Share on whatsapp
There is only one thing in India that makes workplaces push back deadlines, and employees huddle together in front of the big screen cheering with enthusiasm or biting their nails in anxiety. It is certainly not real-time performance analytics. Yes, it is cricket.
The Indian Cricket Team has always been the spotlight, and has even claimed the top spot this year in the ICC T20 rankings by defeating Australia in Australia for the first time in cricketing history. While we are enjoying this sweet victory, there is another cricket team from India that is struggling to gain recognition despite its uniqueness and brilliant performance.
Managed by the Cricket Association for The Blind in India, otherwise known as CABI, the Indian Blind Cricket Team with players who have visual impairment was formed in 1998. This team won the 2014 Blind World Cup finals against Pakistan. In 2012, India won the first T20 world cup in Bengaluru, and is the only blind team in the world to have won all three championships – T20, ODI and Asian championship. They have proven that disability is no barrier to participating in sports, and especially a game that unites this entire country.

Hats off to the captain

“I thought the lights in my life went out. I retreated into a shell, until I picked up a bat and purpose came rushing back.”
Ajay Reddy is leading Team India in the 2017 T20 World Cup Blind Cricket. He has shined on the pitch several times before including the most recent Asian Championship. Ajay loved cricket and wanted to be a player. He always believed that his visual impairment was a barrier to his dream. Blind school encouraged him to play without worrying about any limitations. Soon, Ajay’s skills conquered any hesitation, and his coach encouraged him to train for a larger pitch.

For the love of cricket

Two blind cricketers from Odisha have been selected for the national team this year. Jafar Iqbal has been blind from birth. All he ever wanted was to be a cricketer. He never bothered about getting hurt by the ball, and went against his worried parents every time that he picked up a bat to play with the kids on his block.
“If you love cricket, cricket loves you back.”

Against all odds for Team India

Shekhar Naik has been an all-rounder, and the captain for five years leading the team to victory. Blindness is a genetic trait in his family with generations of visually impaired people, leaving Naik blind by birth. As he came from an economically weak background, his family never encouraged his interest in sports. A surgery gave him partial sight in one of his eyes, and much later in his childhood, he got to go to blind school.
“From my Grade 5, I started spending all my vacation of two months there itself. I used to work in farm fields in those two months of time. I used to earn about Rs.1000(INR) to Rs.1500(INR) and could afford my food and clothing with that for the whole year.”
This was where Naik took the first step towards his dream. When he was ridiculed by the villagers, his mother challenged him to achieve something in cricket. Fueled by this fire he worked hard for years, overcame terrifying obstacles and became a part of the national blind cricket team.
Not as glamorous as you think
Unfortunately, the Blind Cricket team does not bask in as much glory as our other cricket stars. They struggle to raise awareness about their sport, just as much as they do to make a living during the off season. Lack of funds and endorsements makes it hard on even the most basic expenditure, and especially their training.
"Visually impaired cricketers don't just play for money, jobs, fame or happiness. We play to gain confidence; we play to prove that a blind man can do anything. Playing cricket gives us that extra motivation and energy.”
This team dreams of winning the next World Cup, but they need financial support for coaching fee, cricket gears, kits, selection trials and more. Although CABI does its best to give the players all they need to compete, it is shocking to know that these star players struggled for kits, uniforms, and travel fares to participate in an event, so much that they contribute from their own pockets to cover the expenses.
How can you help?
This is the Indian Cricket Team, crossing all barriers. They deserve equal opportunities and support. They have won the Cup in 2012 and 2014, and dream about not just the victory, but love and support from Indian cricket fans. While they work hard for us every year, it is time to do our part for them.
Your contribution will go a long way towards helping these amazing players not only win the World Cup again but also spread a message that anyone with an ending passion for cricket can make it big.
Donate here.
Breakup Of Funds


Click here to contribute or know more details about this campaign.
Donate 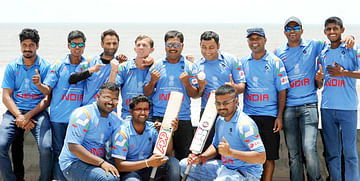 This team is struggling to gain recognition and funds though they have never let us down.