India’s Fencing Champion Bhavani Is Preparing to Participate in Tokyo Olympics. And You Can Help. | Milaap

You are sending a message to
Tanaya Singh
Go back

India’s Fencing Champion Bhavani Is Preparing to Participate in Tokyo Olympics. And You Can Help.

Shares
Shares
Share on whatsapp
Not many of us would know much about a sport like fencing in India. A few others probably wouldn’t even have heard of it. For Bhavani Devi, the 22-year-old resident of Chennai who is India’s National Fencing Champion, it is more than a sport. She currently holds the 85th rank for fencing in the world. The sport is Bhavani’s passion and becoming a successful player is one of the most important goals in her life.
But taking up a sport that is not so well known in a country is easier said than done. “When the whole country celebrates a victory, they need to realise that if they had supported and motivated budding talent, there would have been many more medals to be proud of,” she says.
As fate would have it, Bhavani missed being selected for this year’s Olympics by a whisker and secured the third position while representing the Asia Pacific region. She missed the first position because of several reasons – the lack of a regular, dedicated coach was one of them.
One of the biggest struggles that sports persons in India have to face is the conservative viewpoint of their families and the society at large. Policies with layers of bureaucratic processes add on the battle. A sports person climbing the ladder has to spend time wading through policies instead of focusing on training. So does Bhavani. For her fencing skills to match and surpass international standards, she needs to train with international coaches.
Bhavani is an incredible achiever who trains very hard in spite of the absence of a dedicated coach or a dedicated institute to train at.
She spends most of her time in Kerala, which has India’s only space for fencing practices. As the sport is not so popular here, it requires her to travel to training centres in France and Germany to sharpen her skills. While she manages to fund her training equipment and gets occasional sponsors for her trips, she needs her coach to be with her during the games and while training.


To travel alone and face an opponent without moral or technical support is an added pressure she has to handle. But taking her coach along while for on-spot motivation and technical advice is a luxury she cannot afford. “I see other 180 fencers with their coaches and family. Because of the lack of funds, I just go and stand there on my own,” she says in a video. She has stories of missing out on opportunities as small as not being able to defend a penalty because she didn’t have a coach beside her.

Listen to her story here:


With our help to support her train better, we can empower the very talented Bhavani get closer to her goal. As a country, we need to stop dwelling on the ifs and buts, and focus on how we can help India’s only Fencing Champion clinch gold. Donate now. 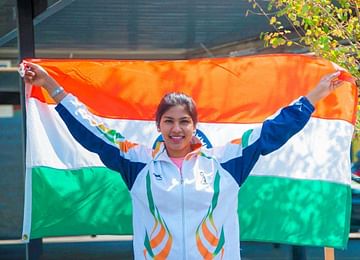